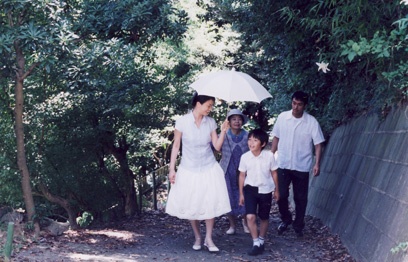 Kore-eda's great new film is what the Japanese call a "home drama". It chronicles a 24-hour reunion of the Yokoyama family; the two adult children and their families are visiting their elderly parents to mark the fifteenth anniversary of the death of their elder brother, who died rescuing a drowning boy. There are no 'dramatic' incidents and the tone is generally light and humorous. But during the day and night we see all that unites and divides this particular family – and makes it just like any other. The stern patriarch, a retired physician, still mourns his favourite son and intended heir, and doesn't hide his disapproval of his surviving son and daughter. The mother lets slip the odd remark which betrays the frustrations and disappointments of her marriage; it's her favourite 1960s pop song which gives the film its title. The central character is the younger son Ryota, a forty-something picture restorer who has only just got married, an adult who has never quite grown up or felt at home in the family. In its unassertive way, this feels as piercingly true as some of the great "home dramas" of the past – such as Ozu's.