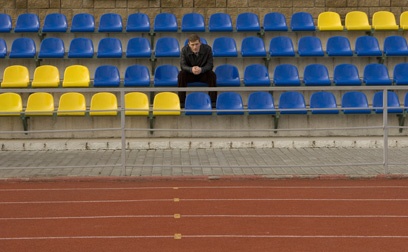 Shultes (Gela Chitava) is a fit young man, in his twenties, who lives with his sick mother. He lives a life of routine, regularly running in the park, yet somehow making more money than he should, and writing notes in a private notebook. In fact, he makes his living as a pickpocket, working with a gang of car thieves, and also independently in the bus and on the metro. A first feature from Georgian-born writer and director Bakur Bakuradze, its bleak and rhythmic portrayal of his hero's profession inevitably recalls the world of Bresson's Pickpocket, here transplanted to Moscow. Shultes recruits 10-year-old Kostik, who is also adept at the art, but their relationship seems no more than professional – Shultes leads a life on autopilot in which no human relations seem to function beyond the level of the mechanical. When he sees one of his victims at the hospital, he becomes temporarily aware, and watches a DV letter she has shot for her lover, stimulating revelations about his own background. Bakuradze's compelling and often poetic work is a debut of some promise.