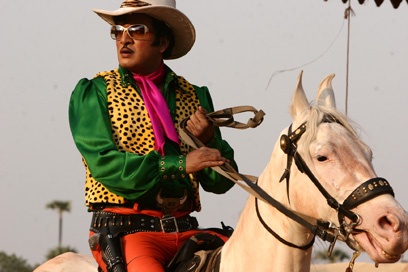 Spaghetti Western meets Tollywood (Tamil cinema), meets The Matrix, meets Austin Powers... Based on the cult Indian television character Quick Gun Murugan this spoof Tamil Western promises to build a dedicated fan base East and West, not least for its OTT Desi humour. Late 1800s, a town of peaceful South Indian vegetarians has been over-run by a gang of meat-eating bandits led by the infamous Rice-Plate-Reddy who are forcing their 'wicked' ways on the locals. The seemingly invincible hero Quick Gun Murugan arrives into town and flushes out the bad guys, but when all seems won he is killed by Reddy. The gods however love Quick Gun and he is re-incarnated into the 21st Century. He finds out that Reddy has also been re-born as a corrupt capitalist, who is taking over the world with McDosa meat dishes, pushing out the vegetarian dosa industry, loved my millions of clean-living veggies. Our cowboy hero comes to the rescue in what will be the dramatic, CGI-soaked, climax of his nine re-births. More than a mad-cap romp this stylistically slick movie shows some of the massive stylistic and cultural mixing taking place in the youth-India today.