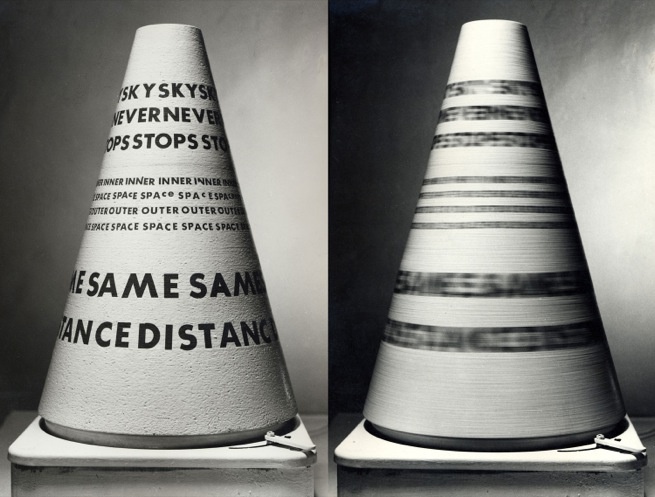 Poor. Old. Tired. Horse. takes an expansive look at text-based art practices, inspired by the concrete poetry movement of the 60s which explored both the literary and graphic potential of language.

The Scottish artist and writer Ian Hamilton Finlay was an important promoter of concrete poetry in Britain, and our exhibition takes its title from the periodical that he ran from 1962 to 1968. Other figures here linked with concrete poetry include Henri Chopin, Liliane Lijn, Dom Sylvester Houédard and Ferdinand Kriwet.

Poor. Old. Tired. Horse. allows the viewer to look afresh at a range of other text-based practices that originated in the 60s and 70s. Robert Smithson and Carl Andre are best known for their contributions to minimalist sculpture, and Vito Acconci for his performance work, but here they are represented by poetic and expressive works on paper. The exhibition also includes poems illuminated by Philip Guston and Alasdair Gray, typewriter works by outsider artist Christopher Knowles and a set of etchings by David Hockney inspired by Greek poet CP Cavafy.

Poor. Old. Tired. Horse. concludes with the work of a number of younger artists. Sue Tompkins, Janice Kerbel and Anna Barham are all represented by text-based pieces, including a film by Barham in which letters are assembled and disassembled by hand. Other artists explore the combination of text and image, including Matthew Brannon and Frances Stark, while Karl Holmqvist is represented by a wall of xeroxed poems and images from his Oneloveworld book.