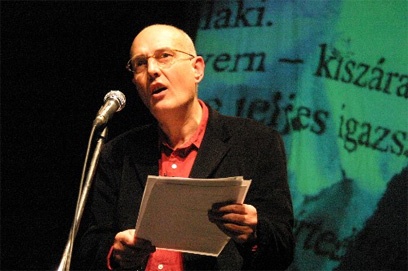 As part of our Poor. Old. Tired. Horse. exhibition, a night of live experimentation from some of the UK’s most exciting poetry performers. Hosted by Chris McCabe with performances from Geraldine Monk, sound poet Peter Finch and legendary outsider Jeremy Reed as part of the ambient word-sound act The Ginger Light.

Geraldine Monk's writing has appeared in numerous magazines and anthologies in Britain and America. Her main collections of poetry include Noctivagations and Escafeld Hangings, both published by West House Books. The Salt Companion to Geraldine Monk edited by Scott Thurston appeared in 2007. Her latest collection Ghost & Other Sonnets (Salt Publishing) was published in 2008.

"Geraldine Monk's poetry activates words, makes them events rather than hollow vessels for received understanding. They play, clash, spark and rub up against one another in unpredictable ways with unforeseen consequences." Julian Cowley, The Wire

Peter Finch is a poet, author and literary entrepreneur. He was born in Cardiff where he still lives. In the 60s and 70s he published the groundbreaking magazine second aeon and was responsible for introducing much of the then-burgeoning concrete poetry movement to Welsh audiences. His own work includes both sound and visual texts. He is the only Welsh entry in Richard Kostelanetz's Dictionary of the Avant Gardes. His poetry is collected in Selected Poems (1984) and Selected Later Poems (2007), both published by Seren. His psychogeographies include the Real Cardiff series as well as a single volume, Real Wales (Seren 2008). He is well known for his readings. He is currently head of Academi, the Literary Promotion Agency for Wales.

"Since the early 1970s, Finch has been the principal innovator in Welsh poetry.....he deserves a Welsh knighthood." - Richard Kostelanetz, A Dictionary of the Avant-Gardes
"Just this side of chaos." - Jon Gower

Jeremy Reed is one of Britain's outstanding poetry performers and has been called by Pete Doherty "a legend. What more can you fucking ask?" JG. Ballard's lifetime favourite poet, he has published more than 40 books of award winning poetry, fiction, and non-fiction. His recent books include, This is How You Disappear (Enitharmon) West End Survival Kit (Waterloo Press) and a novel The Grid (Peter Owen). He collaborates with Itchy Ear as The Ginger Light.

"Jeremy Reed's talent is almost extraterrestrial in its brilliance. He is Rimbaud reconfigured as the Man who fell to Earth, a visitor from deep space whose time machine was designed by Lautreamont and de Sade, and powered by the most exotic fuels the imagination has ever devised." J.G. Ballard

"The most beautiful, outrageously brilliant poetry in the world". Björk

Chris McCabe was born in Liverpool in 1977. He has published poems in Poetry Review, Magma and Manhattan Review and his first collection The Hutton Inquiry was published by Salt in 2005. He is a regular performer of his poetry, has featured a poem on the Oxfam CD Lifelines and recorded a CD for The Poetry Archive. His second collection Zeppelins (Salt) was published in 2008 and a pamphlet called The Borrowed Notebook (Landfill) followed in 2009. He works as a Joint Librarian of the Poetry Library, London and lives with his wife and son.