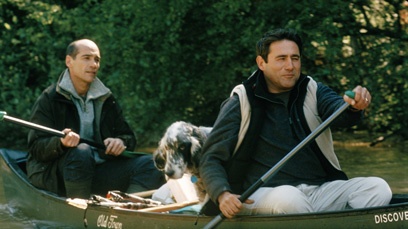 This unsettling feature by Arnaud des Pallières may be – along with Philippe Grandrieux's A Lake – the most love it or hate it film in this Festival's French selection, but like the Grandrieux, it demands to be seen by anyone with an interest in contemporary cinema's outer limits. Based on John Cheever's 1969 novel Bullet Park, des Pallières' film is set in the South of France, in an exclusive gated community for the super-rich, where life would seem idyllic for Georges and Helen Nail (Lopez, Richard) – if not for the traumas that their teenage son is going through. Meanwhile, in an unsettlingly fragmented narrative, we see a wealthy newcomer (Barr) arrive in the community, laden with a troubled past and a troubling future. Long takes and glacially stylish photography by Emmanuel Machuel, plus music and sound design (Martin Wheeler) that gets deep under your skin, make for a troubling and enigmatic ambience not a million miles from the dystopian chic evoked by J.G. Ballard's Côte d'Azur-set Super-Cannes. A strong cast includes New Wave veterans Jean-Pierre Kalfon and László Szabó, plus Geraldine Chaplin at her very eeriest. Parc may perplex you, but it's likely to haunt your sleepless moments.