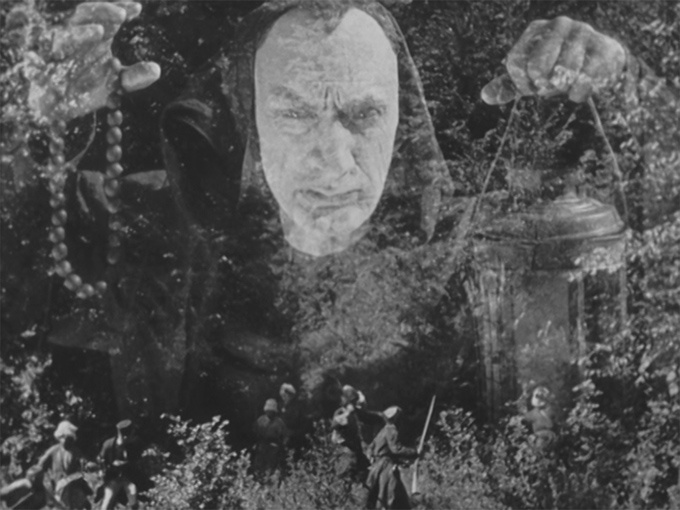 Oleksandr Dovzhenko’s Silent Trilogy: Life and Death in the Times of Revolution - Zvenyhora

Through the centuries, an old man looks after his two grandsons and guards the Scythian treasure hidden in the Zvenyhora mountain. Before his eyes, as if in a dream, he witnesses one historical period after another – from the arrival of the Varangians and the Haidamak Cossacks to the First World War and the October Revolution.

The old man’s elder grandson Pavlo commits to finding the treasure, the symbol of Ukranian national identity, and becomes possessed by a gold rush, which triggers fantastic visions in the heads of treasure hunters. His younger grandson, Tymish, trades his grandfather’s archaic world of nature for a remedial school for workers and industrialisation, the signifier of Bolshevism. The brothers meet on the enchanted mountain for a climatic battle, a metaphorical portrayal of the Ukrainian civil war.

The first film in Dovzhenko’s silent Ukrainian trilogy brought him fame as an original and talented avant garde film director, but also ignited a fierce debate about the national cinema in Ukraine.

Of this film, Dovzhenko himself reflected: “Zvenyhora... is me: contradictory, visionary, often uncontrollable, quivering with an acute sense of conflict and the rhythm of all ages.”

The magic tricks of early silent films, the gloomy mysticism of German films of the 1920s, Chaplin-like irony and avant-garde editing – in a unique way Dovzhenko combined all of these elements in his epic film.

About the music
FUTUREthno is a Ukrainian-Polish band playing ethnic music of the future. This band interprets folk themes with the language of jazz and modern electronic music. The founder, Ukrainian pianist Roman Bardun, studied in the Jazz Department of Frederic Chopin Music School in Poland, where he met the other members of the group: Philip Shymanyak (violin), Lucas Ovchynnikov (double bass), Dominic Yaske (percussions) and DJ Krime, one of Poland’s best-known DJs.