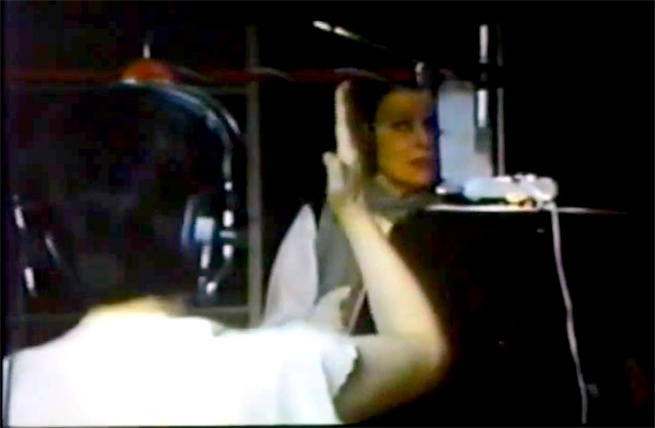 A Nos Amours continues a retrospective of the complete film works of Chantal Akerman with Les années 80, Akerman’s extraordinary prototype adventure in the world of the MGM musical.

Perhaps because Godard had done it (with Une femme est une femme), as had Jacques Demy (with Les demoiselles de Rochefort), so too was Chantal Akerman spurred to conceive of making a Technicolor musical. Or there again, maybe it is just the fact that Minnelli’s musicals at MGM (how wonderful is The Band Wagon!) are such very good films, that any film artist would want to navigate those waters. The trouble, in 1983, for Chantal Akerman was that a significant budget would be required. The solution, to put it crudely, was to make a ‘making of’ before the making, a kind of calling card that would beguile financiers.

Les années 80 is that – but it is also an experiment, an adventure in intertextuality, the revelation of process that is in itself a search for a way of making. Chantal Akerman appears as herself, off and on camera, urging, instructing, commanding, performing. The spirit of her first film, Saute ma ville!, is reignited – spritely, energetic and full of fun.

The beginning is a voice, speaking over a black frame: in the beginning was the word. At the close, the Jewish Seder’s closing words are intoned: next year in Jerusalem. This is a film that offers the promise of that which is yet to come. In one sense that is The Golden Eighties that would be successfully financed and made in 1986, but in another it is the unattainable object of desire which for an avant-garde artist must be forever distant.