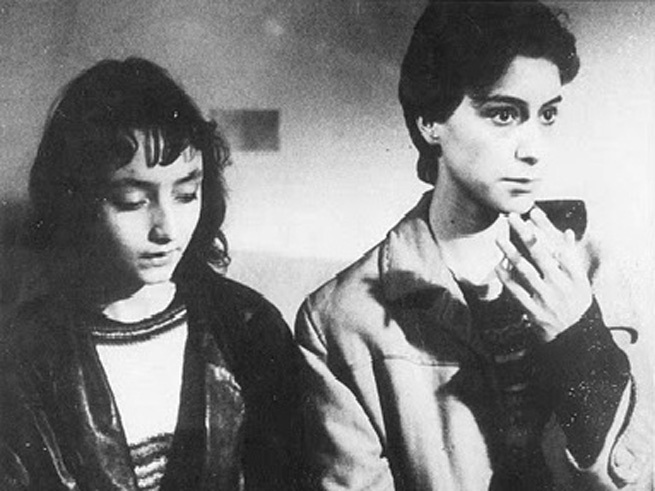 A Nos Amours continues a retrospective of the complete film works of Chantal Akerman with five incredibly rare short films made in the 1980s. These films have not, as far as we can determine, ever been seen in the UK. These films are playful, daringly so.

J'ai faim, j'ai froid (1984) 12 mins
Two young Belgian women in Paris. They finish each other’s sentences, they smoke each other’s cigarettes: they are on the lam together. They are joined at the hip and ready for the challenges of the day—as women in the world—as long as they stick together. Spritely, playful, composed. Akerman has said, in an interview with Nicole Brenez, “My friend and I . A little musical comedy without singing”. Is this film therefore autobiography?

Lettre de cineaste (1984) 9 mins
A filmmaker’s self-portrait, asking hard questions of herself and of us. Invoking Aurore Clément as a kind of stand-in or proxy, a glamorous counterpart to Akerman who sports a drawn-on moustache. What is cinema for? Who is it for? If the Mosaic prohibition on making graven images includes film images, then where does that leave a Jewish filmmaker?

La paresse (1986) 14 mins
A segment on sloth from a German TV commission on the theme ‘Seven Women, Seven Sins’. As Akerman also told Nicole Brenez: ‘Claire (Atherton) worked, while I stayed in bed’. Again, Akerman mines her own life for material with which to weave her fine cloth.

Le marteau (1986) 4 minutes
The hammer is the tool a sculptor uses to chip away at the block. It is the emblematic tool of French artist Jean-Luc Vilmouth, who this film is ostensibly about. Akerman here instigates a game of musical chairs, as if the block is being chopped away. The winner is then permitted to hurl a hammer out into the starry night, where it whirls like the bone that becomes a spaceship in Kubrick’s film.

Rue Mallet Stevens (1986) 7 mins
In concrete terms, between 1926-27 Robert Mallet-Stevens, a great architect of modernist inclination, made a set of cubist houses in the 16th Arrondisment, on what was then named Rue Mallet-Stevens. This film, enigmatic, cryptic even, is set in that very street. A courting, or perhaps parting, couple cling to one another. A car approaches, its radio tuned to a station playing a song from Golden Eighties. What looks like a baby is brought out of a car by night, and taken into an apartment where a woman is playing a cello (Sonia Wieder-Atherton playing Dutilleux).

Thanks for financial support from the British Film Institute, Wallonie-Bruxelles International and Film Hub London (managed by Film London).

Please note that all films are 18+ unless otherwise specified.