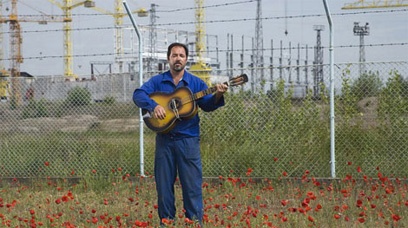 The Mosquito Problem & Other Stories

A truck chugs around the streets of a small town, with comically voluminous clouds of white smoke billowing from the antiquated machine at its rear. Within moments this northern Bulgarian town of Belene is almost completely shrouded in noxious anti-mosquito fumes. Thus the scene is set for a series of eccentric but nonetheless charming residents to share their thoughts on life in Belene. The almost year-round mosquito infestation is, of course, the most readily obvious problem but, as this witty and engaging documentary soon reveals, this rather quotidian obsession masks some of the more dark and disturbing stories the community has to tell. In recent history Belene has played a significant part in the practical, and at times brutal, realisation of national ideology. From being the site of one of the notorious Work Education Centres of the Communist era (enforced labour camps for enemies of the regime) to hosting an ill-fated nuclear power plant in the 1980s, Belene and the infamous Belene Islands are now home to both a virtually redundant prison and a carefully managed nature reserve. The prospect of the recommissioning of the nuclear facility ignites many concerns from the local people, whose stories are told with just the right balance of playfulness and respect. A real delight.