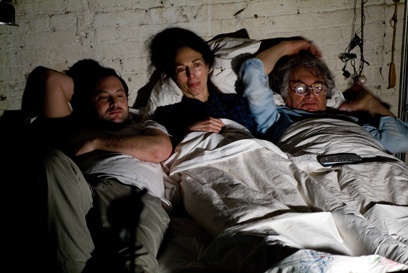 Wry, affectionate and highly original, Azazel Jacobs third feature is both a beautifully nuanced story of a thirtysomething taking stock, and a personal and poetic tribute to New York bohemia. In one of a number of autobiographical elements, Jacobs casts his own parents – redoubtable experimental filmmaker Ken and his wife Flo – as the parents of his onscreen alter-ego Mikey (Matt Boren), and shoots most of the film in their New York loft. After a short visit, Mikey is set to return to his wife and small child in California. Instead he reappears at his parents home, with a story of complications over his flight. As days pass, Mikey shows little sign of leaving, prevaricating and making up excuses, slipping back into a kind of suspended adolescence of comics and old crushes, eating the food his loving Mom prepares and avoiding the calls of his increasingly hurt and irritated wife. Meanwhile his parents grow as mystified as she is, uncertain what to do about their son's apparent existential crisis. Treading a beautifully judged line between melancholy and humour, and deftly including glimpses of Ken Jacobs' own films, this fictionalised home movie is, to quote the New York Times' Manohla Dargis, 'independent cinema defined'.