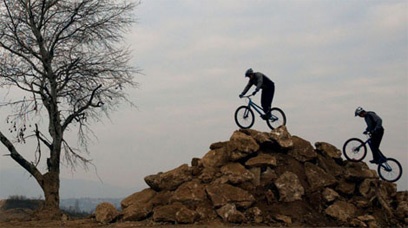 Benedek Fliegauf's Forest and Dealer had their UK premieres in the 2003 and 2004 editions of the Festival, so it's with great pleasure that we welcome to London his latest feature, deserving winner of the FIPRESCI prize at its recent world premiere in Locarno. Though Milky Way is perhaps Fliegauf's most experimental film yet, it's always accessible and mesmerisingly beautiful. It consists of ten lengthy landscape shots filmed with a static Scope camera, most of them featuring subtly modulated sound and human figures engaged in what initially appear to be strange, arcane rituals.

There's no overall plot - though the painterly scenes proceed from night through various exquisitely captured daylight hues and back to night again - but each vignette suggests some sort of small, mysterious narrative, be it suspenseful, sad or (as if often the case) drily funny. Rather like a cross between Herzog's Fata Morgana, Kiarostami's Five and the tableaux of Roy Andersson (with hints of Béla Tarr, Otar Iosseliani and David Lynch thrown in for good measure), the film nevertheless succeeds as a distinctively original look at the modern world - a fresh, deeply ambivalent look that never makes quite clear whether it's the watchers or the watched who might in fact be aliens.