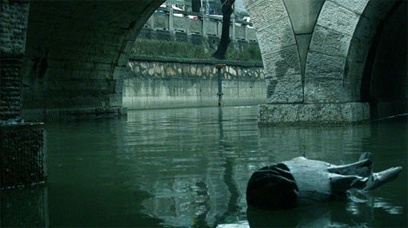 Zhang Yuedong's quietly rapturous debut feature is in three parts, each one featuring an individual who has somehow lost his bearings: a shepherd who has wandered away from his flock, a repairman who seems to have nothing to repair, a farmer who ventures into town to sell watermelons from a cart. Nothing particularly dramatic happens to any of them; they just have angular little conversations and come across mysterious poles set upright in the ground. But the hyper-reality of the colours and the 'unfinished' nature of the encounters suggests that they (and we!) are in a dream state - possibly Freudian but not at all Dali-esque - which is essentially a slightly heightened version of everyday life. Brilliantly chosen faces (not least the director's own; he plays the shepherd and pops up in the other two parts as well) and an ineffable line in deadpan humour generate a one-of-a-kind warmth. Everything here turns out to be leading up to a small climactic epiphany which is disproportionately affecting; barks and other disturbing noises are present in the phenomenal sound-mix, but kept safely off-screen.