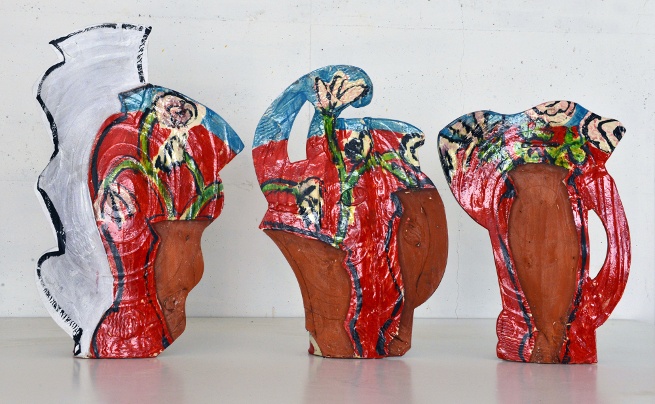 The demise of medium specificity is located around the same time as the demise of modernist art – towards the end of the 1960s. Since that time artists have resisted conforming to the perceived conventions of a medium, or being confined to one discipline. Additionally, making art today does not necessitate a break from the past, and many artists create new forms of art through complex and fluent merging of past idioms, styles and formats. Yet among such pluralism, it is noticeable that ceramics has recently proven fertile territory for experimentation and creative speculation within contemporary art. Taking as a starting point the influence of Betty Woodman’s work on a younger generation of artists, the panel discuss contemporary interests in ceramics, one of the oldest forms of art practice.

Caroline Achaintre (UK, 1969, lives and works in London). Recent solo exhibitions include those at Tate Britain, London and Castello di Rivoli, Turin (2014- 15) and her ceramic and textile works are currently part of the touring British Art Show 8 (until 2017). Her forthcoming solo exhibition at the BALTIC Centre for Contemporary Art, Gateshead opens this summer.

Tommaso Corvi-Mora has been actively involved in contemporary art since the late 1980s, first as a curator and writer in Milan, then working in commercial galleries. In 1995 with Gregorio Magnani he opened London gallery Robert Prime with Gregorio Magnani, presenting the work of many international artists such as Angela Bulloch, Liam Gillick and Isa Genzken. In 2000, Tommaso Corvi-Mora opened Corvi-Mora and in the last 15 years the gallery has hosted more than 100 exhibitions, showing artists Brian Calvin, Anne Collier, Richard Hawkins, Roger Hiorns, Jim Isermann, David Lieske, Imran Qureshi, Tomoaki Suzuki and Lynette Yiadom-Boakye, among others. Since 2012 the gallery has been showcasing many potters and artists working in clay, such as Adam Buick, Walter Keeler, Julian Stair, James & Tilla Waters and Sophie Wiltshire.

Jenni Lomax has been the director of Camden Arts Centre, London, since 1990 where she has established an international programme of exhibitions, residencies, education projects and public events. She was awarded the Chevalier dans l'ordre des Arts et des Lettres in 2007, and received an OBE for her services to the Visual Arts in 2009. Before Camden Arts Centre, Jenni developed and headed up the Community Education and Public Programmes at the Whitechapel Art Gallery throughout the 1980s. Throughout her career she has been involved in an advisory capacity with many arts, education and charitable organisations and has been a member of selection and judging panels for numerous awards and exhibitions including The Turner Prize, Arts Foundation Award and the Jerwood Drawing Prize.