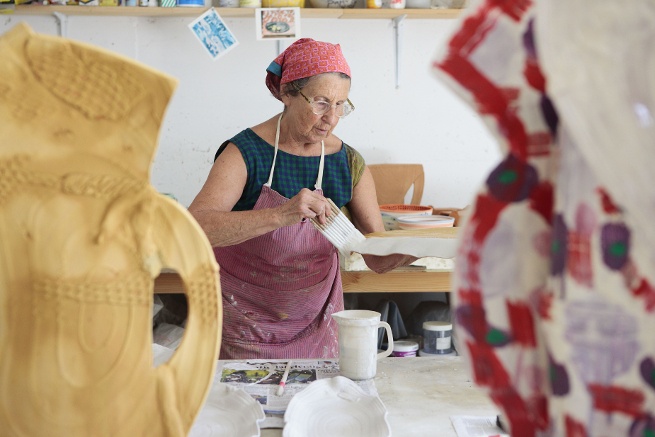 Artist Betty Woodman is in conversation with curator Vincenzo de Bellis on the occasion of her exhibition Betty Woodman: Theatre of the Domestic (2016).

Betty Woodman began making work in 1950 with clay as her chosen medium. Throughout her practice, she has constantly explored new directions and introduced new techniques and media. Woodman's conceptual boldness and her ambitious experimentation, in which she combines such unlikely materials as lacquer paint on earthenware and terra sigillata, have generated a unique series of innovations. The ICA exhibition follows her first solo museum show in Italy, at the Museo Marino Marini in Florence which is the artist’s second home and where she has been living and working for six months of every year for over 50 years. Although each exhibition has a bespoke selection of works, they both focus on her recent production, especially works made after 2006, the year of her major retrospective at the Metropolitan Museum in New York.

Vincenzo de Bellis (b. 1977) is Co-Director and Curator at Peep-Hole Art Center, Milan. Since 2012, he has also been Artistic Director of Miart, international modern and contemporary art fair, Milan.  His most recent exhibition Ennesima. An Exhibiton of Seven Exhibitions on Italian Art is on view at Triennale di Milano until 6 March, 2016. In 2015 he also curated Betty Woodman's exhibition at Museo Marino Marini, Florence. His recent exhibitions at Peep-Hole include: Calvin Marcus (2015); Ull Hohn and Tom Burr (2015); Andra Ursuta (2014); Trisha Baga (2013); Gabriel Sierra (2013); Renata Lucas (2011); Pavel Büchler and Evangelia Spiliopoulou (2011); Mario Garcia Torres (2010); Ahmet Ogut. (2009). De Bellis is also editor of Peep-Hole Sheet, a quarterly of writings by artists, which is now at its 24th issue. In 2010 he was guest-curator at Museion, Bolzano where he curated a solo show by Mexican artist Gabriel Kuri. De Bellis holds a Master of Arts in Curatorial Practice at Center For Curatorial Studies, Bard College, Annandale-on-Hudson, NY.