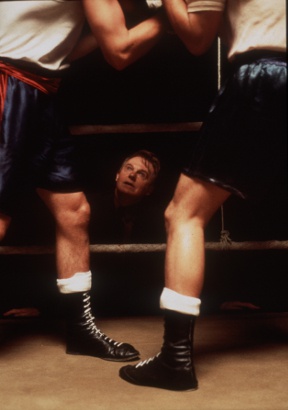 Love Is The Devil + Introduction with Gregor Muir

Due to unforeseen circumstances, director John Maybury is sadly unable to attend tonight's screening and sends his apologies. ICA Executive Director Gregor Muir will be introducing the film in his absence.

Exploring the territory where art, love and sex collide, Love is the Devil charts the powerful and dangerous relationship betweens one of Britain's most controversial artists, Francis Bacon (Derek Jacobi) and his lover and muse George Dyer (Daniel Craig). This is a dazzling, audacious feature from John Maybury, one of Britain's most exciting directors, portraying a bawdy, decadent world of artists' studios, casinos and late night bars, including the infamous Colony Room Club, presided over by foul-mouthed patroness Muriel Belcher (Tilda Swinton).

Derek Jacobi's portrayal of Bacon is precise and mesmerising, whilst Daniel Craig gives a raw, expressive performance as the tough petty thief who became the model for some of Bacon's most intense and celebrated paintings, his ultimate vulnerability throwing his lover's glory into sharp relief. The film's fantastic visual style captures the extraordinary dynamism of Bacon's art; the lighting and colour palette are inspired by his work, and the film's atmosphere is one of both beauty and grotesque.

Buy a ticket for this film screening and FB55: Discussing Francis Bacon for: