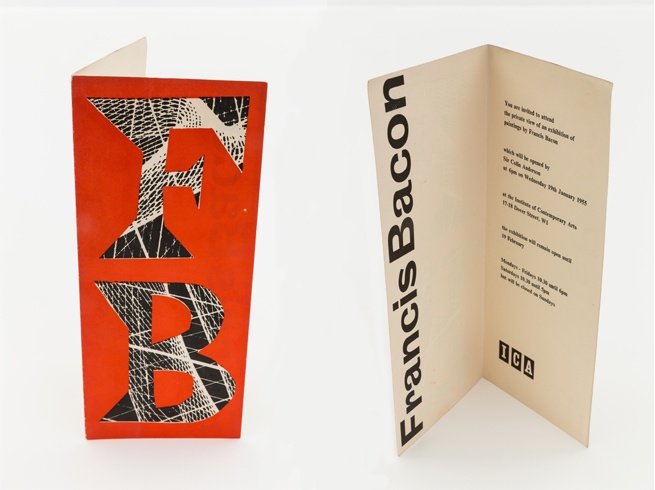 FB55 is an archival display of Francis Bacon’s show held at ICA's former premises on Dover Street in 1955. It was Bacon’s first ever solo institutional exhibition in the UK. The presentation in the ICA Fox Reading Room includes a display of materials such as press reviews, invitation cards and related publications.

Having represented Britain at the Venice Biennale the previous year, alongside Lucian Freud and Ben Nicholson, hardly any documentation survives and surprisingly little is known of Bacon’s 1955 ICA exhibition. The exhibition was organised with the help of philanthropist, collector and ICA founder Peter Watson - then the richest man in Britain and a longstanding Bacon supporter, whose death a year later was shrouded in mystery.

An inspiration to a younger generation of artists, Bacon set himself apart from the more youthful Independent Group (IG) whose direct use of photographic material would eventually become synonymous with the birth of Pop Art. That said, Lawrence Alloway - whose critical writing rounded on the influence of 'mass popular culture' on Post-War artists - cited the birth of Pop Art in Britain as having started with Bacon's work in 1949. No doubt this was a reference to the photographic imagery derived by the artist from films, popular magazines, scientific manuals and newspapers. Referring to his IG colleagues as 'mixed-media jackdaws', Bacon distanced himself from the IG by claiming the photographs that littered his studio floor were useful to him in much the same way that a traditional painter might use a life model. Unlike the IG, Bacon rarely appropriated photographic images wholesale. As was his whim, Bacon re-contextualised the images that interested him the most, and for a period in the 1950s this reworking of images made room for homosexual readings that were inevitably intertwined with his own life.

Given the hue and cry surrounding homosexuality at the time of Bacon's 1955 ICA show, it was agreed to include a painting, seemingly late in the day, that may have been viewed as potentially risky. Sourced from a photographic sequence of men wrestling by Eadweard Muybridge, Two Figures in the Grass (1954) shows two naked men engaged in an intimate act. Sexual images of any description would have anyway been shocking in the 1950s, but the positioning of this particular imagery in the public realm would certainly have been considered chancy at a time when homosexuality was illegal in the UK. In keeping with the ICA's radical art and culture remit, this exhibition has been referred to as one of Bacon's more confrontational shows, combining images of the Catholic state, homosexuality and Bacon's gilded gutter life.

Francis Bacon was born in Dublin on 28th October 1909. The family’s first residence in Ireland was Cannycourt House near the Curragh, Co. Kildare, an area renowned for its horse breeding and racing. Bacon’s only prolonged experience of formal schooling was as at the Dean Close School, Cheltenham, where he boarded from 1924 to 1926. At the age of 23, Bacon painted his first truly original work, entitled Crucifixion. In 1945 Bacon exhibited his Three Studies for Figures at the Base of a Crucifixion at the Lefevre Gallery in London. In 1954 he exhibited with Ben Nicholson and Lucian Freud in the British Pavilion at the Venice Biennale. Over the course of the next fifteen years, solo exhibitions and retrospectives of Bacon’s work were held around the world. These spanned several continents, from Madrid and Barcelona in 1978, to Tokyo, Kyoto and Nagoya in 1983 and Washington D.C. in 1989. In 1985 Tate held a major retrospective with 125 works and the director’s statement described the artist as the ‘greatest living painter’. Three years later a retrospective of just 22 works was held in the New Tretyakov Gallery in Moscow. It was the first show by a major Western artist to be mounted in the Soviet Union. Francis Bacon died in Madrid on 28th April 1992.