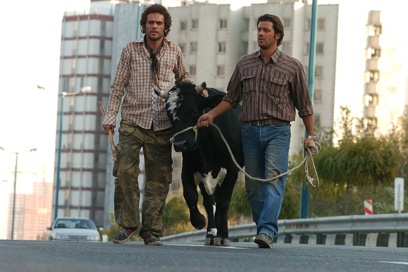 Two young men from an Iranian village who work in an animal market are given a seemingly simple task: to deliver a large, wounded cow across the country to Tehran within 24 hours. That's the central premise of director Mehrshad Karkhani's road movie with a difference. As we follow the two struggling young men crosscountry, replete with their overweight bovine passenger in the rear, Karkhani effortlessly looks at the divide between rural and urban life in modern day Iran, combining frequent moments of gentle humour with a powerful sting in the tale. Encompassing some luminous shots of Iran's countryside, Loose Rope catches the wide-eyed wonder of the two men as they enter the big city and encounter smiling girls, overly officious traffic wardens and bemused crowds of spectators. The director leaves the politics in the background – although the opportunity for allegorical interpretation remains clear for all to see – in favour of a wonderfully human tale of two wandering souls. An opening coda informing viewers that no animals were hurt in the making of the film also gives a portentous glimpse at what awaits.