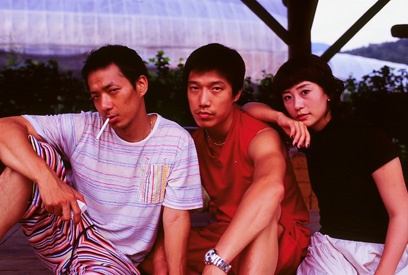 After a movie set largely in one room (the excellent Spying Cam), Whang Cheol-Mean takes to the open road with three mismatched strangers who think they have a common purpose. A woman who calls herself 'Joaquin' meets two men by arrangement in a car park. We soon discover that they've previously 'met' on the suicide website she hosts. They pool their money and start driving; when the money runs out they'll all end their lives. There are tensions from the start. The talkative guy (he calls himself 'LA') has brought along his pet dog and can't stand Joaquin's choice of 'suicide music'. Then the macho, taciturn guy ('Heballet') takes the car and leaves the others stranded... The film has several surprises, but respects the tradition of the road movie. The characters are changed by being thrown together, by the people they meet and by the very act of travelling, and their destination is not the one they expected. Whang, the doyen of Korea's indie filmmakers, is obviously responding to the phenomenon of internet suicide clubs, but he also has plenty to say about men, women and the changing mood and direction of the Left.