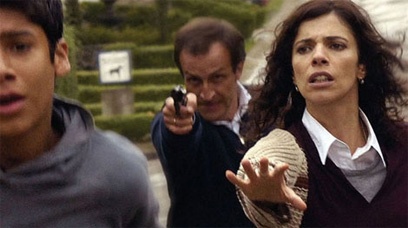 When three teenagers from the other side of the tracks enter the wealthy residential estate of 'The Zone' they cannot be prepared for what awaits them. For The Zone is a world unto itself, protected by high gates and private security guards that attempt to keep the poverty that surrounds the estate at bay. As their proposed break-in goes wrong, the boys panic and suddenly there's a dead body and a maid fleeing in fear. In the altercation that follows two of the assailants are killed but the third, Miguel is able to flee. What he soon realises is that the laws of the land don't apply in The Zone and, as the residents of the estate do verbal battle with the police over control of the area, Miguel begins to realise that there is no escape. From Uruguayan-born director Rodrigo Plá comes a taut social thriller that juxtaposes the misadventures of Miguel with the growing awareness of Alejandro, a privileged teenager in The Zone caught between the conflicting narratives of his 'law abiding' father and Miguel. Plá's film is a remarkable study of two Mexicos, mutually suspicious of each other, and it offers a telling warning of the dangers of segregation in all its shapes and forms.