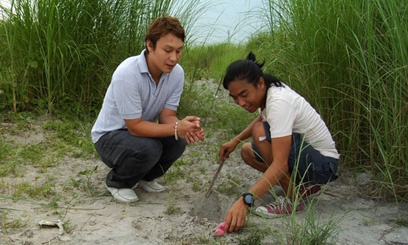 Francis Pasion's debut feature took the Best Film and Best Actor prizes at the Cinemalaya Festival in the Philippines, and there's no doubt that it heralds a distinctive new voice in Filipino movies. The first voice we hear, though, is the woman narrator of the Channel 8 show Dearly Departed Ones, a 'reality' programme which brings out the soap opera in a family's reactions to a sudden death. She takes us to a village in Pampanga, on Ash Wednesday 2008, and introduces Luz Mercado as she wakes early, little suspecting the terrible news she's about to hear on TV: Luz' eldest son Jay, a schoolteacher working in Manila, about to take up a lucrative post in Baltimore, has been stabbed to death in an apparent gay sexcrime. About ten minutes into this brain-rot, Pasion backtracks to show how TV director Jay Santiago and his crew manipulated the situation and set up the re-enactments. What follows is not just a lacerating satire on the 'ethics' of contemporary TV production but also a wry reflection on the kind of images of the 'Third World' that are produced for the delectation of the rest of us. Sharp, smart and very, very dark.