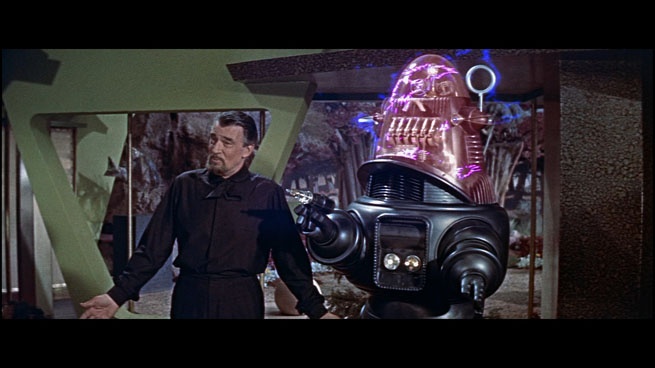 Forbidden Planet is an engaging 1956 science fiction take on William Shakespeare’s The Tempest, following a ship full of American astronauts landing on a mysterious planet where Walter Pidgeon and his mini-skirted daughter, Anne Francis, guard the remains of a lost civilization.

Forbidden Planet combines a naive view on the conquest of space (the cruiser C -57-D looks like a flying saucer, which at the time was capturing the collective imagination of America), with an unusual reflection on subconscious fears that in the film take shape as humanoids programmed to haunt the visitors of planet Altair. Classic themes displayed in space works during the 1940s and 50s can be found in Forbidden Planet – the brave captains, exploration of unknown worlds, beautiful girls - which also mirror the patterns of certain adventure novels of those times. It also features an anthropomorphic robot designed to serve, rather than destroy the human race. This reflects a radical shift in thinking within the genre of science fiction initiated by novels such as Frankenstein by Mary Shelley. It is also worth noting that the robot’s name is a tribute to Robbie from the short story of the same name, by Isaac Asimov - the first writer to have imagined a harmless robot whose sole purpose was to serve and protect humanity.