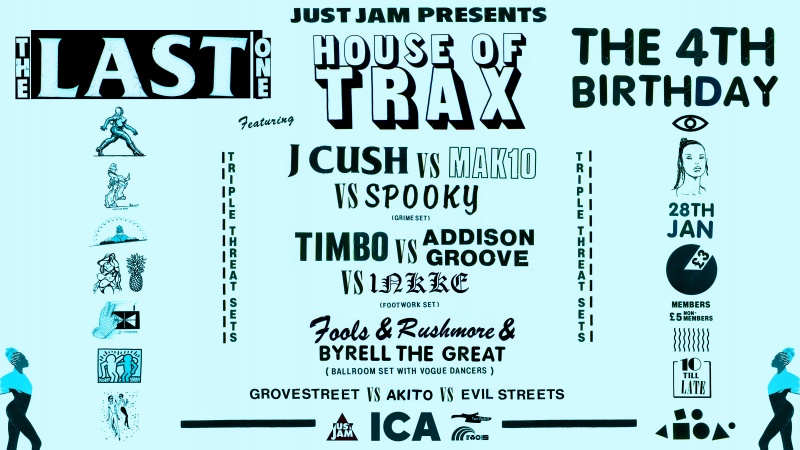 THIS EVENT IS NOW SOLD OUT

House Of Trax celebrate and close an outstanding four-year run. The vital club night was created by Matthew Thomas [Rushmore] and Benedict Bull [Fools] back in 2012 with a penchant for the most unique UK and US club music, spanning ghetto house, ballroom, grime, footwork and more.

Their line-ups read like a poignant case study of club culture history, featuring Tyree Cooper, Traxman, Paul Johnson, Slimzee and Spooky through to modern icons like MikeQ, Venus X, Vjuan Allure, DJ Sliink and DJ Earl, many of whom played their first ever UK gigs at House of Trax.

This celebration of the last four years brings together new and previous guests, partnering with close friends, Just Jam to celebrate the genres and cultures they have represented.

The ICA is transformed to bring you the live artistic visual enhancements expected with Just Jam, featuring music by Timbo [Tim&Barry] following on from his previous ICA outing where he and Barry premiered the excellent footwork documentary I'm tryna tell ya. Also providing the sounds is J-Cush, founding member of Future Brown, who previously performed at the ICA, and owner of pivotal music label Lit City Trax.

Byrell makes his UK debut at this event. He is a fast rising producer and DJ from the New York Ballroom Culture, and has come up under the likes of modern day Icon MikeQ. He will go back-to-back with House Of Trax residents and owners: Fools & Rushmore, who should need no introduction.

J Cush, owner of Lit City Trax label and of Future Brown fame, will be sharing the set with local don and all-round badman producer and selector Spooky. To top this b2b trio off is one strictly for the heads, the one and only Mak10.

Addison Groove was one of the driving forces to expose footwork to the UK scene and produce music inspired by that style. He will go b2b with Timbo, who co-runs Just Jam/Tim&Barry, and has also been a crucial component to footwork's fledgling support in the UK and Europe. Inkke joins this unlikely paring, who is typically known for his grime productions, but also produces footwork alongside many of the other strings to his bow.

Trax Couture rising stars and ones to watch, Akito, Grovestreet and Evil Streets are the next generation of producers pushing things forward with all of their own productions taking inspiration from the genres featured at this event, and more.