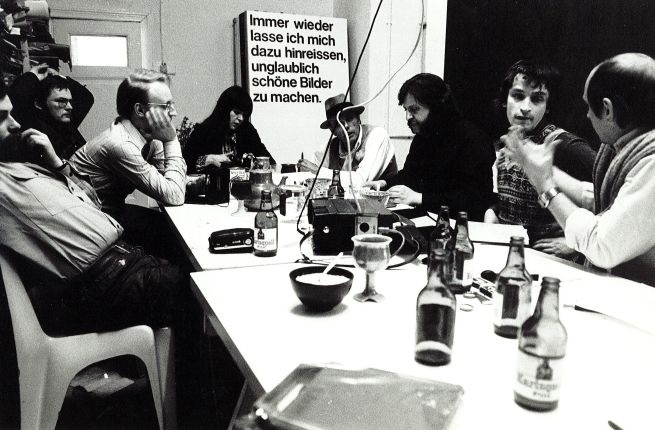 Chaired by writer and curator Jo Melvin, this discussion explores the legacy of the seminal 1974 ICA exhibition Art Into Society – Society into Art: Seven German Artists and looks at current curatorial practices and pedagogical models that attempt to democratise beyond the established structure of exhibition making. Speakers include Viviana Checchia, Louise Shelley and Giles Smith.

Louise Shelley is Collaborative Projects Curator at The Showroom where she has coordinated the Communal Knowledge programme since 2010. Communal Knowledge is a series of collaborative projects with local and international artists to propose and activate approaches to critical engagement with The Showroom’s social and cultural surroundings. Communal Knowledge is critically engaged with the possibilities for a gallery education programme to work in ways that respond to artistic practice and different contexts. This is articulated through producing work, events and alliances that address the role of art operating within and responding to themes including pedagogy, work/labour, feminist legacies, precarity, the dialectic of social re/production, and class and gender. She is also a member of the Cinenova Working Group, a non-profit organisation dedicated to distributing films and videos made by women.

Viviana Checchia is Public Engagement Curator at the Centre for Contemporary Arts, Glasgow. Prior to taking up her role at CCA, Viviana has produced a range of international projects including curating the Young Artist of the Year Award 2014 (YAYA) at the A.M. Qattan Foundation in Ramallah which supports young Palestinian artists and artists of Palestinian descent, with a curatorial focus on the process of learning and developing. She has also curated with Eastside Projects, Birmingham; Nottingham Contemporary and Nitra Gallery. Viviana was part of a curatorial team of over forty that produced the 4th Athens Biennale which re-imagined the model of a biennale as a space for cultural debate and grassroots organising. The Biennale won the 2015 European Cultural Foundation Princess Margriet Award for Culture - given annually to European artists and thinkers whose work shows the potential of culture in creating an inclusive Europe and effecting social change.For the past three years, Viviana has also been co-director of vessel based in Puglia, Italy. A platform for critical discussion related to cultural, social, economic and political change through working with communities; vessel ran a public programme of talks, screenings, walks, commissions and reading groups.She has been a participant in the AICA International Summer Seminar Program in Yerevan (2009); the European Course of Contemporary Art Curators organized by the Province of Milan and the Fondazione Antonio Ratti (2009); the Gwangju Foundation Course for International Curators (2010); the ICI Curatorial Intensive, From “Official History” to Underrepresented Narratives at CCA Derry-Londonderry (2013); and the Cittadellarte/UNIDEE workshop on ‘Social Engaged Art Practices and Art Education’ (2014).Viviana has lectured at the Centre for Curatorial Studies, Bard College, and the International Academy of Art Palestine as well as for Charsoo Curatorial Course in Tehran, and was an instructor for the V-A-C Foundation’s Summer Curatorial School in Moscow (2013/2014). With Anna Santomauro, the two curators are co-recipients of the 2013 ICI/DEDALUS Research Award for research carried out in the United States. Viviana is currently a PhD candidate at Loughborough University in the UK.

Giles Smith is a founding member of Assemble.

Assemble is a multi-disciplinary collective working across architecture, design and art. Founded in 2010 to undertake a single self-built project, Assemble has since delivered a diverse and award-winning body of work, whilst retaining a democratic and co-operative working method that enables built, social and research-based work at a variety of scales.  Both making things and making things happen.

Giles Smith is a founding member of the collective, having trained in Architecture at Cambridge and the Royal College of Art. He teaches a studio at the University of Westminster that explores the relationship between Architecture and capital, and is currently working on a number of projects at Assemble that explore the role of art practice in the wider city.