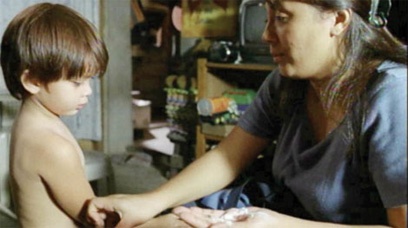 For at least the first half-hour, you'd swear that Brillante Mendoza's new film was a ciné-vérité documentary, not scripted and acted, and the feeling for the realities of present-day life in Manila remains absolutely convincing right through to the haunting final shot. Living in a shanty-town slum, Thelma and her carpenter husband supplement their meagre income by fostering orphans until they can be placed with adoptive parents. They have two kids of their own, both boys, who are fortunately helpful around the house and affectionate towards their little 'brother'. The film chronicles the last few days of Thelma's fostering of the three-year-old John-John, from his non-appearance in a pre-school pageant to the moment he is handed over to his new American parents in a luxury hotel. As in his debut The Masseur, Mendoza gets completely naturalistic performances and has a great eye for telling detail. But his greatest strength is his sensitivity to social ironies and conflicting emotions. And the current fashion for 'celebrity' adoptions in the 'Third World' makes his film exceptionally timely.