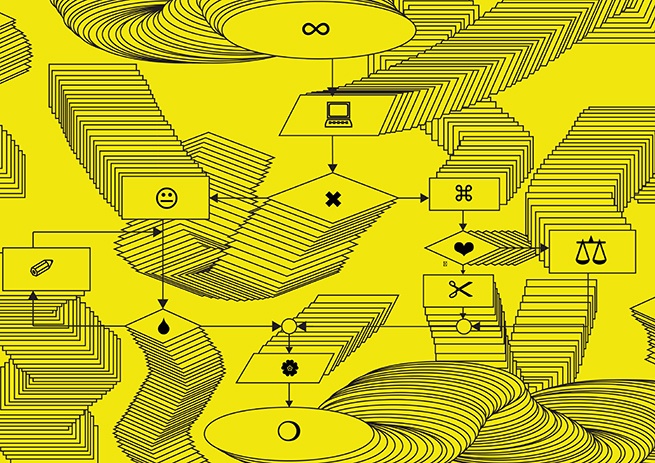 The Ethics of Coding and the Human Algorithmic Condition

Men are conditioned beings because everything they come into contact with turns immediately into a condition of their existence. - Hannah Arendt, The Human Condition (1958)

In this discursive event, writer and researcher Yuk Hui and philosopher Peg Birmingham explore the intersections between the practice of ethics and the technology of algorithms. The ‘algorithmic condition’ marks a contemporary moment when the global economy and governmental control function through an algorithmic networked environment.

Coding and the production of algorithms have become a part of new artistic practices and social inventions, including art hacktivism, generative artworks, legal alibis, self-help bots and even cybernetic companions. Researchers, philosophers and artists venturing into the world of coding and algorithmic programming will quickly run in to the potential violence of these methods, ranging from racial profiling and online abuse to social exclusion and algorithmic warfare.

Revisiting Jean-François Lyotard’s The Postmodern Condition (1979) and Hannah Arendt’s The Human Condition (1958) and questioning the relevance of their philosophical theories for the contemporary moment, Peg Birmingham and Yuk Hui will touch on notions of ethics, the inhuman, citizenship and rights.

Addressing the extent to which the coding of the social, ethical, and pedagogic is always already invested in the maintenance of power relations that control the economic conditions for knowledge, the speakers question how a shared and common responsibility can be generated through the actions of a community in the digital age.

She is the co-editor (with Anna Yeatman) of Aporia of Rights: Explorations in Citizenship in the Era of Human Rights (Bloomsbury, 2014), and co-editor (with Philippe van Haute) of Dissensus Communis: Between Ethics and Politics (Koros 1995).She has published in journals such as Research In Phenomenology, Hypatia, The Graduate Faculty Philosophy Journal, Law, Culture, and the Humanities, and New Centurion Review on topics that include radical evil, human rights, violence, deception, and the temporality of the political.

Yuk Hui studied computer engineering, cultural theory and philosophy at the University of Hong Kong and Goldsmiths College in London, with a focus on the philosophy of technology. He is currently a researcher at the ICAM of Leuphana University Lüneburg where he also teaches at the Institute of Philosophy. He has published on philosophy and technology in periodicals such as Metaphilosophy, Research in Phenomenology, Angelaki, Parrhesia, Cahiers Simondon, Jahrbuch Technikphilosophie, Implications Philosophiques and Intellectica.

He is the author of On the Existence of Digital Objects and The Question Concerning Technology in China: An Essay in Cosmotechnics (both 2016), and co-editor of 30 Years after Les Immatériaux: Art, Science and Theory (2015) which explored the legacy of Lyotard’s exhibition Les Immatériaux.

Audience members are encouraged to visit Seth Price’s exhibition across the ICA’s gallery spaces, and in particular his most recent video, presented in the ICA Cinemas. Social Synth is an abstraction enabled by technological development: a computer-controlled robot camera was employed to gather thousands of close-up images of the skin of a squid, which were then stitched together algorithmically and imported into a 3D cinema programme to add motion and light effects.

This event is part of the Ethics of Coding and the Human Algorithmic Condition research project led by Kingston University. The interdisciplinary think tank is working toward a report for the EU Commission asking how knowledge and ethics can be defined in societies that are governed by algorithmic systems and objects. The project is funded by the European Commission: H2020 – EU.2.1.1. – Industrial Leadership – Leadership in enabling and industrial technologies – Information and Communication Technologies, project number 732407.