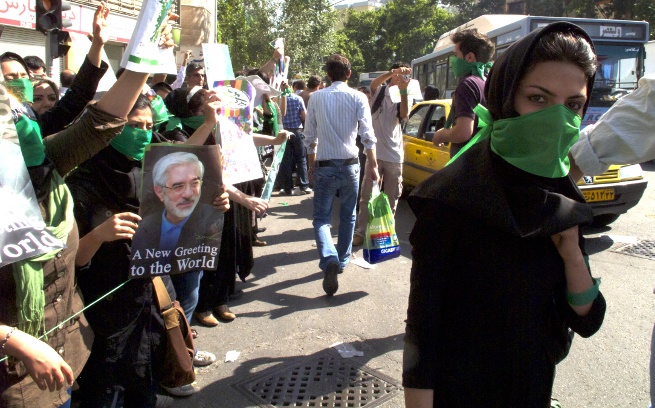 The screening is followed by a Q&A with Bani Khoshnoudi.

“A deep political analysis of one century of revolt and repression in Iran, and the various roles of images in this collective history. The Silent Majority Speaks is, for me, one of the works that legitimates the existence of film, as for example The Hour of the Furnaces.” Nicole Brenez

Made in Iran during and after the “Green Movement” of 2009, The Silent Majority Speaks investigates a century’s imagery of revolution and struggle in Iran to build a picture of resistance in film and in social and political life. This is the UK premiere of this important exploration of Iran’s silenced, but definitely not quiet, history.

Originally made anonymously and briefly released in 2010 when it was shown at the International Documentary Film Festival Amsterdam, it was credited to the “Silent Collective”. The film cannot be shown officially in Iran, and even amongst activists it is spoken of in whispers. Bani Khoshnoudi broke that silence and “came out” in 2014 as the author thanks to the support of French scholar and programmer, Nicole Brenez, and others interested in the film.

The Silent Majority Speaks uses archival film material of struggle, revolution, and collective moments of resistance that are set to work with and against newer footage shot by the author during the month of June 2009, as well as mobile phone images gleaned from YouTube. A fascinating treatment of what internet archive can do in the essay film form, the newly-shot footage is also a testament to the anonymous collective resistance of “the majority”.  Bani Khoshnoudi’s probing voiceover balances her own version of history as repetition with the responsibility of being a spokesperson for those who dare not speak. Silence itself becomes a blade with which to cut the images.