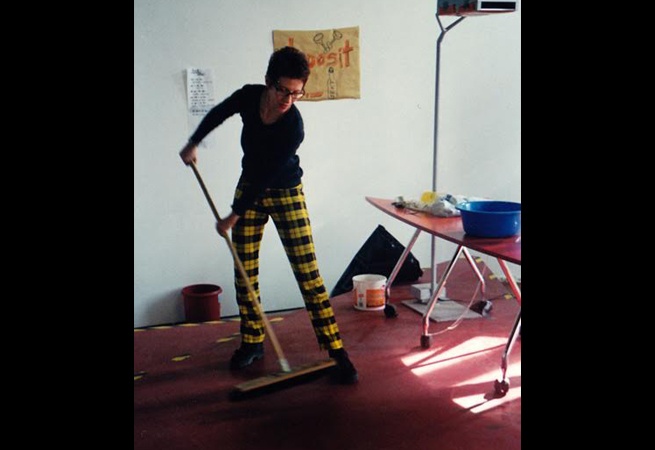 This event is sold out

Convened by Res. with Cornelia Sollfrank and Diann Bauer, this workshop considers post cyber-feminist propositions, taking as its starting point Hester’s essay After the Future: n Hypotheses of Post-Cyber Feminism. This considers the 100 Anti-Theses diagram by Cornelia Sollfrank and Old Boys Network’s (OBN) in the First Cyberfeminist International publication.

some cyberfeminists came to favour disidentification as an approach to movement building... the anti-theses seek to provide a negative definition of cyberfeminism, loosely mapping this position through a series of playful and performative rejections rather than via an assertion of overarching identity – Helen Hester

Devised as a collective diagramming, the workshop opens the floor for a wider group of practitioners to contest the definition and articulation of post-cyber feminism. The discussion will question appropriate distribution, access and platforms for making this diagram 'public', reflecting upon the wider political context for Hester’s definition.

Suggested preparatory reading includes After the Future: N Hypotheses of Post-Cyber Feminism. This was commissioned by Res. in response to material selected for the Kathy Rae Huffman Reading Room (2016/17). The next stage of this programme, Alembic, will be realised at Res. in 2018, when a version of the diagram produced during this workshop will be disseminated.

Diann Bauer is an artist and writer based in London. She is part of the working group Laboria Cuboniks who in 2015 wrote Xenofeminism: A Politics of Alienation, and the collaborative A.S.T. based in Miami whose focus is urbanism and climate change. Bauer has screened and exhibited internationally at Tate Britain and The Showroom, London, The Sharjah Biennale 13, UAE, Deste Foundation, Athens, The New Museum and Socrates Sculpture Park, New York.

Res. is a mutable project based in a gallery and workspace in Deptford, South East London that seeks to be an associative working environment from which to share and develop research. The curatorial committee is Helen Kaplinsky, Sarah Jury and Lucy A. Sames. Alembic is an ambitious multi-platform programme questioning the reproduction of bodies, alchemically transmuted through digital technology, and responds to media art curator Kathy Rae Huffman’s library of rare books held by Goldsmiths, University of London.

Cornelia Sollfrank (PhD) is an artist, researcher and university lecturer who is based in Berlin. Recurring subjects in her artistic work in and about digital media and network culture are new forms of (political) organization, authorship and intellectual property, gender and techno-feminism. She was co-founder of the collectives women-and-technology, -Innen and the Old Boys Network and currently does research at Zürich University of the Arts in the field of art and commons.