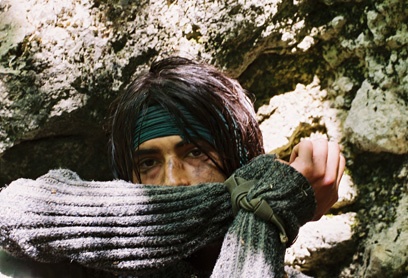 When a company of Russian soldiers finds itself trapped in the mountains, the experienced Rubakha and the young rifleman Vovka are ordered to take a captive who knows the mountain trails. They succeed, but an unexpected bond develops between Rubakha and Djamal, his handsome Chechen prisoner. Adapted by Vladimir Makanin from his 1994 story, A Prisoner of the Caucasus, Alexey Uchitel's film examines relations between the three men as they traverse difficult terrain. While Uchitel downplays the homoerotic elements of the original, the attraction remains apparent, and the interactions are powerfully conveyed by the central trio. Shot against the breathtaking landscape of the Crimea (standing in for Chechnya), the Chechen actors are from the theatre in Grozny. Winner of the Best Direction award at the Karlovy Vary festival, the film depicts a day of absurdity, intimacy, and terror in a pointless war. The film, though, is part of a longer tradition stretching back to Pushkin (the basis of Bodrov's earlier Prisoner of the Mountains), with Makanin's story inverting the original plot, opposing the power of beauty and the force of violence.