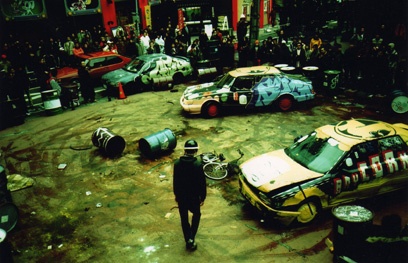 In the early 1990s, a number of like-minded young American creatives, stimulated by the DIY ethics of skateboarding, graffiti, comics, hip hop and punk rock, began to make art that would reflect their lives. They gravitated to the New York's Alleged Gallery, where Aaron Rose was owner and director, and in him they found a co-conspirator, a willing collaborator and enthusiastic promoter. Despite the fact that few of them had any formal artistic training, over the following years their work would transform popular culture. Rose would go on to be co-curator of a large-scale museum exhibition titled Beautiful Losers: Contemporary Art & Street Culture, currently touring the world, and this informative, inspiring and disarmingly moving film emerges as something more than a companion piece, as an important document of a period in recent art history. Rose is one of the directors of this film, so perhaps it's not surprising that its subjects are so open, comfortable and revealing when they're talking about their lives and work. The filmmakers reciprocate by taking the artists' work very seriously, presenting it with both admiration and affection.

There will be a free educational screening and Masterclass with Aaron Rose on Monday 20 October.