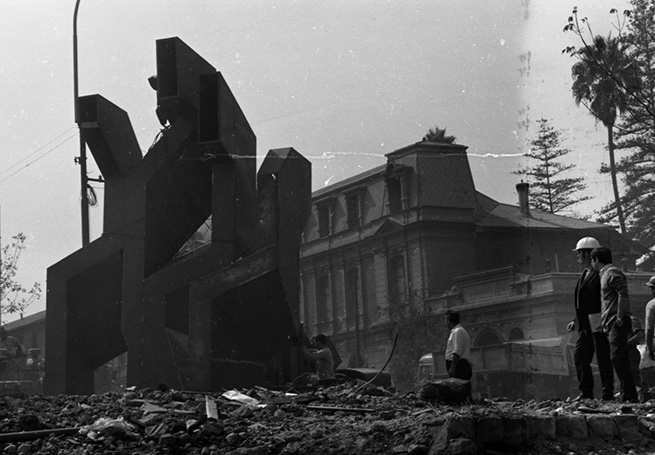 This is the UK premiere of this film, with an introduction and discussion led by Charlotte Skene Catling, co-founder and co-director of ArchFilmFest London. Catling will be in discussion with director Bruno Salas .

Chile, 1972. During the Salvador Allende administration, 34 artists were called upon to create works which would be incorporated into a new piece of architecture: the UNCTAD III building (United Nations Conference for Trade and Development), today known as GAM. However, after the 1973 Pinochet coup d’état, the military occupied the building, renamed it, destroyed its works of art, and transformed it into a symbol of military dictatorship. Forty years later, Joaquín Maruenda, son of the late sculptor Félix Maruenda, finds a record of the UNCTAD II project that leads him to investigate his father’s “Chimeneas” (Chimneys) sculpture and its possible restoration. Joaquín, together with artists and construction workers of the original building, will try to answer the question: why did they destroy the art work?

In partnership with ArqFilmFest and the Embassy of Chile in the UK.