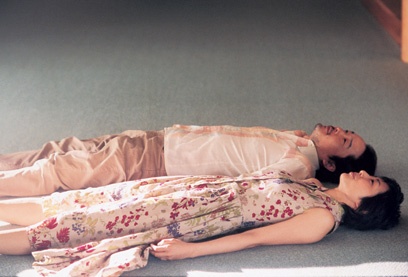 All Around Us (Gururi no Koto)

Ryosuke Hashiguchi's wise and deliciously witty film chronicles eight years of a marriage. In 1993, shoe-repairman Kanao ties the knot with Shoko, who works in publishing, because he's got her pregnant. Apart from liking each other, they don't have too much in common. She's a bit of a control freak, complete with firm ideas about how often they should make love, and he's well loose and easy-going. But a friend asks him to take over a TV news job as a courtroom sketch-artist and he soon finds himself exposed to – and drawing – some of the most disturbed people in Japan, from child murderers to a member of the Aum sect which gas-attacked the Tokyo subway. Shoko, meanwhile, traumatised by a miscarriage, begins to fall apart. They socialise with other, contrasted couples, and there are normal family crises as elderly relatives start to fall ill. Previously best known for gay-themed films (Like Grains of Sand, Hush), Hashiguchi gets right to the heart of what it takes for two people to nurture each other and hold it all together. He's aided by wonderful performances from two first-timers: Tae Kimura as Shoko and the novelist Franky Lily as Kanao.