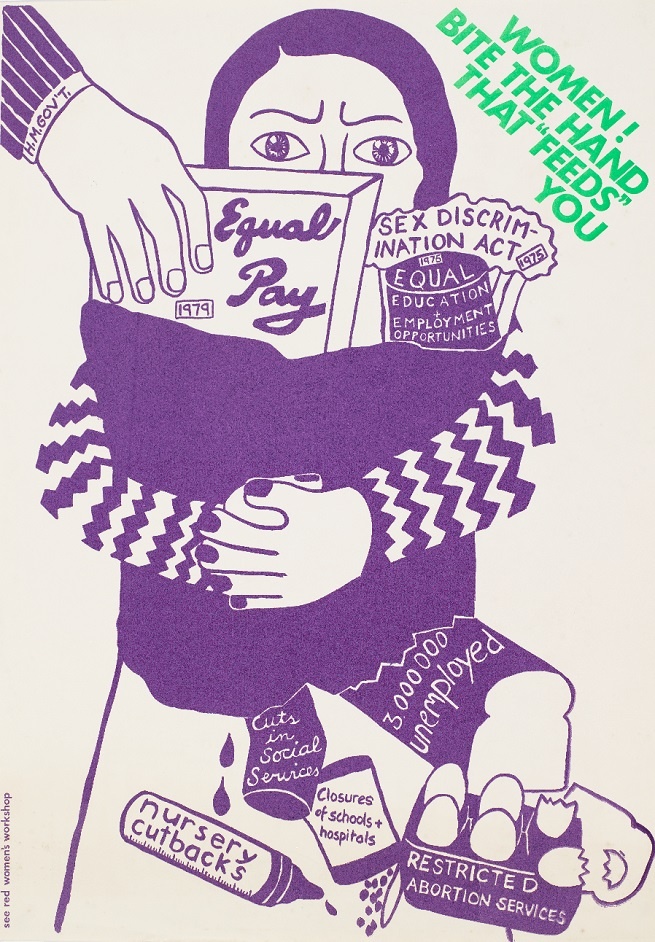 See Red Women’s Workshop was a silkscreen printing collective that produced posters, illustrations, and conducted service printing for the women’s liberation movement. Founded by three former art students in 1974 who met through an advertisement placed in the radical feminist magazine Red Rag, the workshop grew out of a shared desire to combat the negative images of women in the media.

Working collectively was central to the ethos of See Red, as were sharing skills and knowledge. The posters produced explored the personal experiences of women; from housework, childcare and sexuality, to sexism and racism, as well as women's role in wider struggles for change. They aimed to promote women’s empowerment and challenge how negative stereotypes of women impacted on us all.

The workshop was based in squats before eventually settling in derelict premises in South London, with renovations carried out by the collective and women in the building trades. Premises however were attacked frequently by the National Front.

The collective averaged 6 women at any one time, but in total over 35 women worked with See Red. The posters were sold worldwide through mail order, bookshops and conferences; equipment and inks were often acquired through firms that were closing down, or through donations. After 1983, the workshop focused on service printing and designing posters for women’s and community groups. Although no new See Red designs were created, the original posters continued to be printed and sold.

The display at Huddersfield Art Gallery will include a selection of posters and archival material produced by the collective between 1974-1983 exploring both the history of the workshop and its legacy today.