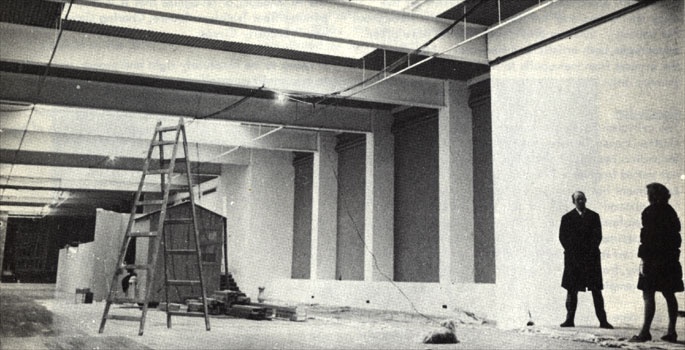 Available now in the ICA Bookshop: Institute of Contemporary Arts: 1946-1968, by Gregor Muir & Anne Massey - a detailed examination of this extraordinary period, illustrated with rare and previously unseen items from the ICA archive.

You can also take a look at the ICA 70th anniversary brochure, celebrating the rich and varied history of the Institute.

Founded in 1946 by Geoffrey Grigson, Roland Penrose, Herbert Read, Peter Gregory, E.L.T. Mesens and Peter Watson, the Institute of Contemporary Arts resisted an initial impulse to become a Museum of Modern Art for London, preferring instead to position itself at the forefront of art and culture. Initially conceived with a special focus on artists working across a range of contemporary art forms, the first ICA exhibitions took place in a hired space at the Academy Hall, Oxford Street, before taking up more permanent residence at 17-18 Dover Street, Mayfair, in 1950. During the post-war period, the ICA would significantly respond to developments taking place in the international contemporary art world.

Throughout the fifties, the ICA became known for groundbreaking exhibitions, including those held by members of the Independent Group such as Growth and Form (1951) and Parallel of Art And Life (1953). Aside from its associations with proto-Pop artists such as Richard Hamilton and Eduardo Paolozzi, the ICA also staged exhibitions by Francis Bacon, Lucien Freud, and Pablo Picasso, as well as attracting a raft of engaged designers and architects to include J. G. Ballard, Terence Conran and Jane Drew.

In 1968, the ICA moved to its present location on The Mall where it became increasingly synonymous with live performance, talks and exhibitions by emerging contemporary artists. At its new home, ICA staged numerous exhibitions including the first institutional shows by Jake & Dinos Chapman, Damien Hirst, Gabriel Orozco and Richard Prince, as well as early shows by Robert Mapplethorpe, Gerhard Richter, Luc Tuymans and Steve McQueen. It also staged a number of live art events and performances by Laurie Anderson, Einstürzende Neubauten and Ron Athey.

In its pursuit of new wave music, the ICA presented The Clash in 1976 and The Stone Roses in 1989, as well as subsequent acts such as the Beastie Boys, Throbbing Gristle, Scissor Sisters and Franz Ferdinand. The ICA also continues to introduce a range of visionary cinema to the UK. Decades of groundbreaking films have lent credence to the reputation of the ICA as the home of independent and world cinema. It also remains dedicated to the display and screening of artists’ film, having recently hosted a weekend of Kenneth Anger screenings with the filmmaker present and feeling at home having screened his work at the ICA on other occasions over the years.

ICA Off-Site projects include the Intruders at the Palace musical benefit in 1988 featuring David Bowie among others. The Pet Shop Boys in 2004 presented Battleship Potempkin as a live event in Trafalgar Square attracting 35,000 fans, while the same number of visitors attended the first ever Art Night in 2016. Other recent Off-Site projects include Cinema on The Steps, a series of screenings highlighting Middle Eastern and Arab cinema, as well as The Old Selfridges Hotel project, also in 2013, with a focus on the London Underground scene from the 1980s to the present day.