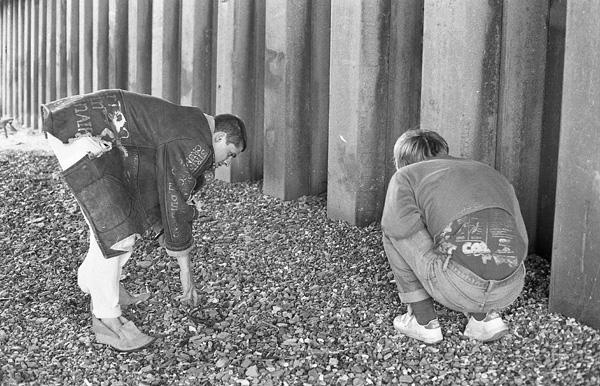 ICA Off-Site: A Journey Through London Subculture: 1980s to Now

'I love this show' - Adrian Searle, The Guardian. Read the review →

A major new project at The Old Selfridges Hotel in London as part of a series of off-site events this summer, A Journey Through London Subculture: 1980s to Now illustrates a perceived thread of creativity between the post-punk era and the present day - a legacy that underpins London's incredible creative potential in the present.

A Journey Through London Subculture: 1980s to Now seeks to make connections between London’s creative past and the present day using photographs of members of ‘The House of Beauty and Culture’ mudlarking on the banks of the River Thames as a starting point. For example, was early YBA, in fact, an extension of 80s DIY culture? Is there a connection between Gilbert & George through the artist/poet David Robilliard to Trojan and Leigh Bowery and from there to Alexander McQueen? In design terms, does the salvage work of Andy The Furniture Maker connect to Martino Gamper’s reassembled chairs or the designs of Bethan Laura Wood? Can we extend the social influence of former nightclubs to artist collective LuckyPDF, or venues like Vogue Fabrics and Cafe OTO, or Iain R Webb’s styling for Blitz magazine to the collections of J W Anderson or Louise Gray?

Deploying over fifty vitrines, alongside video works, installations and billboard-sized images, the project brings together a wide range of multi-disciplinary practice including art, fashion, graphics, craft and design, highlighting the idea that distinct and differing art forms can exist in the same space at the same time. The timeline set by this project spans the moment when 80s counterculture would arguably enter the mainstream and the London underground scene, ravaged by AIDS, would eventually be co-opted by a rising tide of commercialisation. In illustrating the path taken by London’s alternative scene, the project explores counterculture today and what emerging artists have in common with their countercultural forebears.

An exciting series of free weekly talks and events are taking place over the course of the six-week duration, and partners and speakers include award winning SHOWstudio, renowned designer Tom Dixon, and the Warhol Museum.

ICA Off-Site: A Journey Through London Subculture: 1980s to Now

Please visit our Off-Site pages for further information on this and other ICA Off-Site projects.

With thanks to Apple

Please be aware that due to the nature of the exhibitions space and its location within a listed building, access to the Old Selfridges Hotel is restricted. The main gallery is only accessible by stairs with no direct access for wheelchair users or visitors with limited mobility.