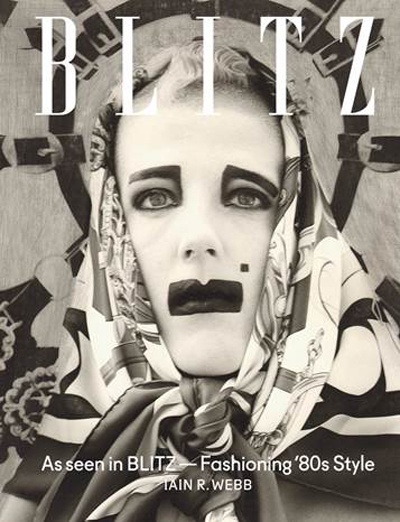 A Weekend with BLITZ Magazine

We are delighted to celebrate the launch of Iain R. Webb's new book As Seen in BLITZ: Fashioning '80s Style with a series of special events. Over the weekend there will be a pop-up show in the ICA Theatre curated by former fashion editor Iain R Webb, a series of talks with special guests, and film screenings.

As Seen in BLITZ: Fashioning '80s Style focuses on 1980s style and culture and includes a wealth of stunning visuals, text and interviews celebrating the deeply influential pages of BLITZ.

In London at the start of the 1980s, three new style magazines emerged to define an era. It was a time of change: post punk before the digital age and at the dawn of a hedonistic club scene that saw the birth of the New Romantics. On the pages of BLITZ, The Face and i-D, a new breed of young iconoclasts hoped to inspire revolution. As BLITZ magazine's fashion editor from 1982-87, Iain R. Webb was at the centre of this world. His images manipulated fashion to explore ideas of transformation, beauty, glamour and sex. The magazine's arresting, subversive fashion pages, and its profiles of disparate designers and creative types, let the imagination run free.

'We're thrilled to be hosting the launch of As Seen in BLITZ. It's incredible to think who passed through the pages of BLITZ magazine - Malcolm McLaren, Madonna, Daniel Day-Lewis... I couldn't have survived the 80s without it.'
Gregor Muir, Executive Director, ICA

As Seen in BLITZ: Fashioning the 80s Style
12pm
This talk is an opportunity to relive the seminal decade of the monthly media, fashion and pop culture magazine with those who were there at the time. From the models and make-up artists to the designers and photographers, each speaker will offer their particular BLITZ experience. Chaired by journalist Hywel Davies, the panel includes Barry Kamen, BLITZ’s ‘poster-boy’, Stevie Stewart and David Holah of Bodymap, and make-up artist Louise Constad, among others.

Fashion & Style Magazines: Then, Now, and the Future
2pm
At the forefront of 1980s counter-culture, BLITZ arguably paved the way for the boom of fashion and style magazines in the 1990s. This panel discussion will explore the influence of BLITZ, charting a legacy over the past decades; will reflect on what is popular now and will consider how magazines must shift as publishing moves away from print towards the digital. Led by journalist Hywel Davies, the talk will also include Penny Martin, editor of The Gentlewoman, Max Pearmain, editor of Arenna Homme Plus and Carey Labovitch, publisher of BLITZ magazine, among others.

Special Film Screening: Liquid Sky introduced by Iain R Webb
4pm
A pleasure-seeking alien lands in downtown New York and gets caught up in a world of casual sex and heroin abuse by insinuating itself into the lives of androgynous hipsters Margaret and Larry (both played by Anne Carlisle). This effortlessly cool 1982 time-capsule features plenty of early '80s fashion, a vivid colour scheme and a weird, pulsing electronic score.

With thanks to ACC Publishing Group.