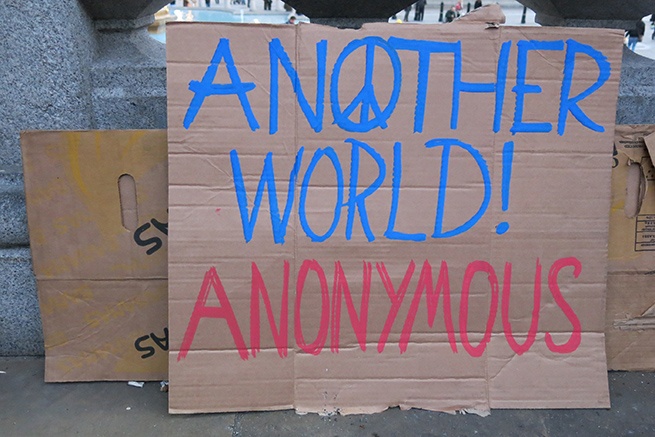 Vita Peacock: Wanting Everything Without Owning It

It's not who I am underneath but what I do that defines me.

So says one Anonymous meme.

Since 2011, activists have been marching through the streets of London on 5 November every year wearing Guy Fawkes masks. Originally an association of ethical hackers, the Anonymous movement burgeoned in Britain as a grassroots response to the politics of austerity and the effects of inequality. But why the masks? Beyond being a badge of membership, what did it mean to cover their faces with the same mass-produced plastic mask?

This talk by Vita Peacock explores long-standing links between personhood and property. In this analysis, property is more than just the ownership of land or goods (although these are often implicated). It is a relationship to the self as having essential and distinctive characteristics. Through their use of masks, it was this form of personhood that Anonymous were repudiating, establishing their protests as spaces of theatricality and of play, of saying and doing things that they otherwise wouldn't.

Yet in an era of increasingly sophisticated surveillance—when the properties of individuals become key mechanisms for their own control—do Anonymous also speak to a wider need to rethink the propertied self? Is it time to cast off ownership altogether and build powerful new notions through which to relate to ourselves, each other, and the places around us?

Dr Vita Peacock is a political anthropologist based in Cambridge. She received her PhD from UCL in 2014 for a study of hierarchy in Germany, and from 2013-2016 researched the Anonymous movement in Britain with support from the Economic and Social Sciences Research Council. Her forthcoming book Through the Looking Mask: Anonymous as Digital Initiation will be published by University of Chicago Press. She currently teaches at Cambridge University.