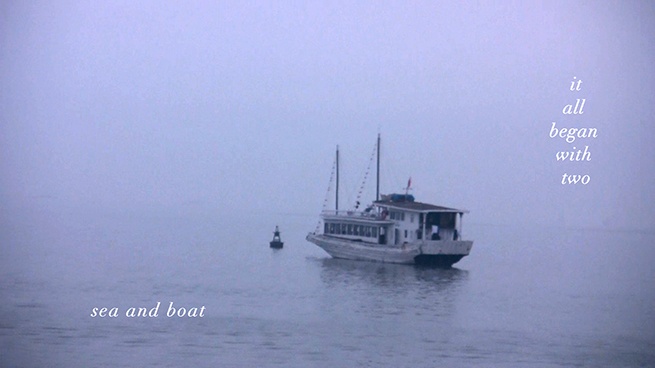 Reflecting on the 40th anniversary of the Vietnam War, Trinh T Minh-Ha's Forgetting Vietnam (2015) mediates the relationship between land, water and the body. Shot in multiple formats, Trinh renders the role of time and its effects on the inhabitants, veterans and national history in Hi-8, SD and HD.

Re-imagining the mythology of Vietnam's creation as a landmass born from the bodies of mythical creatures, the film touches on the trauma of violence as well as issues of ecology and environmentalism. Vietnam in ancient times was named đất nứớc vạn xuân – the land of ten thousand springs. In the contemporary geopolitical moment, Vietnam thrives on a fragile equilibrium between land and water. These two elements—earth (đất) and water (nứớc)—form the two main structural threads that run through Forgetting Vietnam.

Between these elements run the daily activities of Vietnam's women in rebuilding society and sustaining the landscape. Besides these images, the film implicates the viewer the processes of preserving and effacing the history of Vietnam, through the act of visiting, returning and documenting the country.

Born in Vietnam, Trinh T Minh-ha is a filmmaker, writer, composer and Professor of Rhetoric and of Gender and Women's Studies at the University of California, Berkeley. Her work includes eight feature-length films honoured in numerous retrospectives around the world, several large-scale collaborative installations including L’Autre marche (Musée du Quai Branly, Paris 2006-2009), and Old Land New Waters (3rd Guangzhou Triennale, China 2008) and numerous publications including Lovecidal: Walking with The Disappeared (2016), D-Passage: The Digital Way (2013), Elsewhere, Within Here (2011) and Cinema Interval (1999).