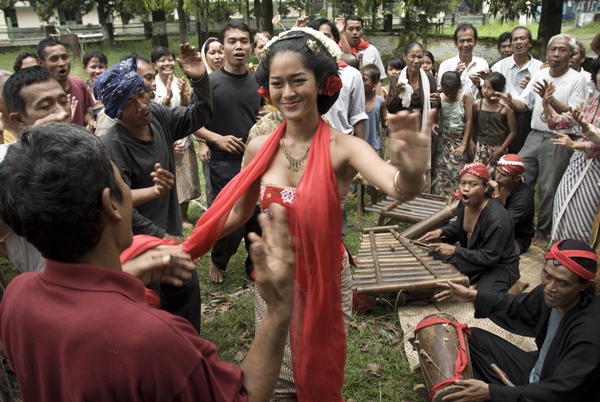 Srintil and Rasus have loved each other their whole life. They both live in a poor village in central Java. Srintil is blessed with her magical dance moves and a village elder believes that she has a destiny and is chosen by the village founder's spirit (the protector of the village), to be a 'ronggeng' (prime dancer).

However, to become a full ronggeng, Srintil has to undergo a procession in which she sells her virginity to the highest bidder. Rasus is devastated to know that Srintil chooses to be a ronggeng and, heartbroken, he leaves to become a soldier. The two lovers are further separated by a dark period in Indonesian history: the 1965 anti-communist purge that took many lives.

The film provides an insight into Indonesia's social, cultural and political backgrounds in the sixties. In the movie, we can hear the actors speak in Javanese Banyumasan dialect, which is mainly spoken by Javanese in Banyumas area, Central Java.

The Dancer is an adaptation of a trilogy novel by Ahmad Tohari titled Paruk Village's Ronggeng (or Ronggeng Dukuh Paruk).

Winner of the 2011 Indonesian Film Festival and Indonesia’s official entry for the 85th Academy Awards.