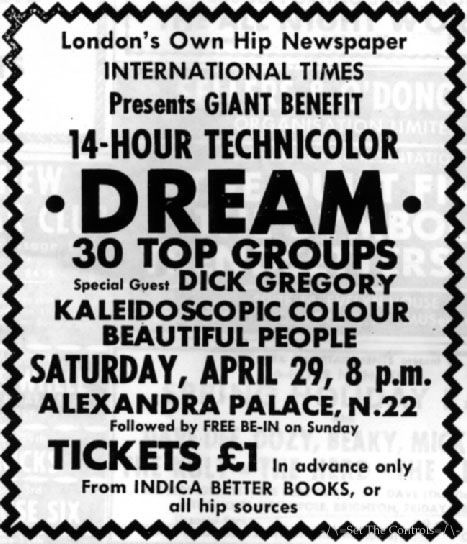 Tell It Like It Was: The Round Table Speaks

1960s underground luminaries offer their own takes on what the original 14-Hour Technicolor Dream event was like, where it came from and where it ended up. This is followed by a Q&A session. The cast includes:

Joe Boyd In 1967, Joe was an American record producer living in London, co-running the legendary UFO Club in Tottenham Court Road and producing, among others, The Pink Floyd, The Incredible String Band and Fairport Convention.

Miles Instrumental in setting the International Times, the UK's first underground newspaper, Miles also ran the Indica bookstore, the hub of counter-cultural activity during the period.

Hoppy Hopkins helped resurrect the Notting Hill Carnival, along with activist Michael X, and then went on to co-run UFO and organise the original 14-Hour Technicolor Dream event, before going down for possession of hash in the week Sgt. Pepper's was released!

John Dunbar was instrumental in bringing The Beatles into the avant-garde and set up the Indica art gallery, which featured early work by Fluxus and all kinds of other kinetic, experimental and conceptual art.