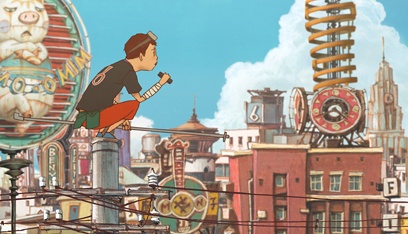 Following the live-action adaptation of his Ping Pong comic stories, the genius of manga artist Taiyo Matsumoto comes to the screen again in this high-energy, visually thrilling anime adaptation of his beloved Black & White tales. The intricately detailed film follows the adventures of two orphan street-kids - Black and White - as they take on the corrupt adult inhabitants of crazed, crime-ridden city Treasure Town, while remaining fiercely loyal to one another.

We are delighted to have Japanese-American manga artist Misako Rocks! here to introduce the film. She will also present her Disney manga hits Biker Girl and Rock & Roll Love and preview her new trilogy Detective Jermain.