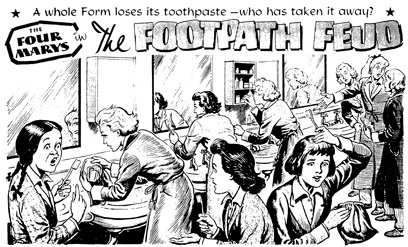 Writer and performer Stella Duffy; Jane Purcell, author of the Radio 4 play 43 Years in the Third Form; Unskinny cartoonist Lucy Sweet; Nina Myskow, former editor of Jackie and others relish the heydays of Girl, Bunty, My Guy and more and reflect on their lessons and legacies. Hosted by Dr Mel Gibson.

Gung-ho but blood-free, the pocket-sized Commando has been winning the war for over 4,000 issues. Experts Steve Holland and David Roach consider the artistry and evolution of war comics with those who created them. Hosted by David Kendall, editor of The Mammoth Book of Best War Comics.

Weirder, grittier, darker, British comics changed radically in the Seventies. Pat Mills talks with fellow writer Gerry Finley-Day, creator of the revolutionary Tammy, and then with artist Kevin O'Neill to set the records straight from Whizzer & Chips and Battle to Action's censorship and the origins of 2000AD, 30 years strong this year. Chaired by Paul Gravett, co-author of Great British Comics.

Authors will be signing their books after each talk.