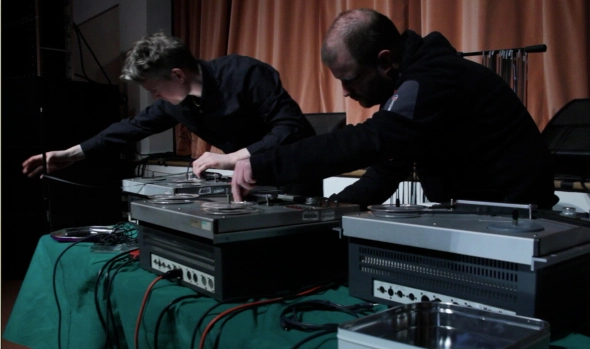 The Embodied AudioVisual Interaction Group (EAVI) convenes a day of audiovisual workshops with Howlround, Calum Gunn and Ewa Justka. Each workshop is led by a musician who will teach participants how to make and use the unique tools they use to create music. Participants will then have the opportunity to perform alongside the artists in an evening concert.

The series of workshops explores EAVI’s key research interests, focusing on embodied interaction with sound and image. Aligning with other aspects of the In formation programme, EAVI locate audiovisual performance within spaces of collaboration and sensory connectivity, articulating new ways for collective and individual interaction to promote learning and participation.

In this workshop, participants will learn how to make and manipulate tape loops with Howlround. Tape splicing and manipulation is one of the oldest and most powerful techniques used to create electronic music, though one that is sometimes forgotten in the age of computers. Join Howlround to learn their unique approach to recording, cutting and playing with tape. Participants then have the chance to be part of a Howlround performance, playing with the loops they make in the afternoon to create living, breathing tape scultpures in the Upper Gallery of the ICA.

This workshop will involve the use of sharp tools

Howlround normally operate as a six-piece featuring Chris Weaver, Robin The Fog and four tape recorders. They work with magnetic tape in sculptural configurations to loop and layer sound in often dense and haunting compositions. Their performances evoke the experimental era of emerging recordings played live with hands-on manipulation of their material, creating immersive soundscapes of mournfully melodies from a half-remembered past that might never have happened.