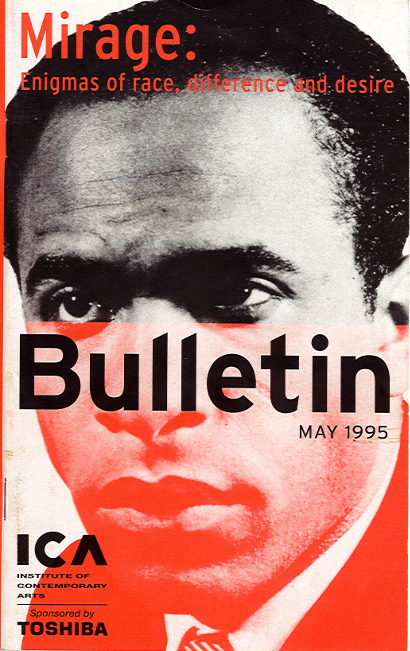 Please note this event will run from 11.15am–5pm, including a break for participants.

On the 20th anniversary of Mirage: Enigmas Of Race, Difference & Desire at the ICA, curated by David A Bailey and organised in collaboration with INIVA, the ICA asks the question: if the 1995 project marked a moment of considering the importance of Frantz Fanon and ways in which his writings on post-colonialism, identity, cinema and psychoanalysis intertwined with artistic practices and race, then what should the contemporary moment reflect upon? Where are we now in relation to structural violence, de-colonising culture and relations, and the power of aesthetics and its explorations of complex formations of racial identities?

Panel 1: Platforms and the desire for institutional frameworks

Speakers discuss the possible role of institutions both in upholding structural violence and de-colonising culture, how platforms and institutions have changed since 1995, which changes are necessary for the future and how we might avoid the traps of monoculture and exoticism in representation.

Panel 2: Networks and circulations of agency in the techno-diaspora

Speakers discuss what a new contemporary internationalism might look like in relation to decolonisation and diasporic networks, how ideas around the need for alliances and collaboration have changed since 1995 and Fanon’s time, and whether we see new models of resistance through affiliations (digital and analogue) emerging in contemporary artistic practice.

Ticket prices for one event

Allison Thompson (PhD) is Director of the Centre for the Visual and Performing Arts at the Barbados Community College where she has been teaching since 1986. She is co-director/curator at PUNCH Creative Arena, an initiative for creative action in Barbados. Thompson has worked with a number of cultural organizations in the Caribbean including the Barbados National Art Gallery Committee, ICOM Barbados, and is the founding president of AICA Southern Caribbean. She has worked with the Black Diaspora Visual Arts project since 2007, organizing a series of symposiums and exhibitions aimed at creating greater visibility for Caribbean art and developing stronger and sustainable working relationships throughout the diaspora. She is co-author of the book Art in Barbados: What kind of mirror image and co-edited Curating in the Caribbean with contributions from nine curators, writers and artists working in the region.

Morgan Quaintance is a London-based writer, musician, broadcaster and curator. Born in South London, he is a regular contributor to  Art Monthly, Art Review, Frieze, Rhizome.org and a number of curatorial sites and blogs. He is a contributing editor for E-Flux’s online publishing portal Art Agenda, is a founding member of the curatorial collective DAM PROJECTS, and is the 2015/16 curatorial fellow at Cubitt Gallery, London. As a presenter he currently works with the BBC’s flagship arts programme The Culture Show, and is also the producer of Studio Visit, a weekly hour-long interviews-based programme, broadcast on Resonance 104.4 FM, featuring international contemporary artists as guests.

Evan Ifekoya is an interdisciplinary artist, exploring the politicisation of culture and aesthetics. Appropriated material from historical archives and contemporary society make up the work. By ‘queerying’ popular imagery and utilising the props of everyday life, the aim is to destroy the aura of preciousness surrounding art. Recent Exhibitions include All Of Us Have A Sense Of Rhythm, David Roberts Art Foundation, London (2015), Embodied Spaces, FramerFramed, De Tolhuistuin, Amsterdam (2015), Studio Voltaire OPEN, London (2015) and 30 years of the Future, Castlefield Gallery, Manchester (2014). Recent performances have taken place at David Roberts Art Foundation and ​Tate Modern, London as well as​ The Marlborough, Brighton and De Tolhuistuin, Amsterdam (all 2015).

Lyle Ashton Harris is an American artist working in photographic, collage and installation media to explore critiques of masculinity and constructions of sex, race and gender. His first exhibition, ‘Face: Lyle Ashton Harris’, was shown at the New Museum in 1993. Since then his work has been shown widely in spaces such as the Solomon R. Guggenheim Museum, the Whitney Museum of American Art, the Venice Biennale and the Andy Warhol Museum, and in magazines such as New York, Vibe and The New York Times (the latter at which he was a photojournalist). In 2014, Harris was also featured on the Independent Lens documentary Through a Lens Darkly: Black Photographers and the Emergence of a People. In February 2015, he received the David C. Driskell Prize from the High Museum of Art. He is Assistant Professor of Art at the University of New York.

Yasmina Reggad has been appointed as curator for Art Dubai Projects 2016. Yasmina Reggad is an independent curator and writer based in London who works between London and Algiers. She holds an MA in Middle Ages History from the Sorbonne University and is presently Programme Curator at aria (artist residency in algiers) and was Exhibition and Projects Manager at Delfina Foundation. Reggad’s research focuses on the politics of futurity, as well as on alternative models of art education. Her recent curatorial projects include a series of evening of performances at Delfina Foundation, UK; Puppetmaster by Adrian Lee at DJART Biennal, Algeria; Djazaïr (with Ali MacGilp) at John Jones Art Art, UK; Intervening Space: From the Intimate to the World at The Mosaic Rooms, UK; Sketches of Algiers 1 by Amina Menia at 1:54 Contemporary African Art Fair, UK. This year she conceived We Can’t Be There. Emergency Provisions for (Un)Anticipated Futures, a six-month series of public events which took place at Goldsmiths University, Tate Modern, the Institute of Contemporary Arts and Delfina Foundation, UK. Reggad publishes essays and articles on contemporary art, takes part in several juries, and is regularly called upon to participate in panel discussions and talks for institutions such as the Delfina Foundation, Goldsmiths University, Cornerhouse in the UK, Sharjah Art Foundation in the UAE, Villa Arson in France or Casa Tomada in Brazil.

Osei Bonsu is a British-Ghanaian independent curator and writer based in London. His writing has been included in a number of museum and exhibition catalogues including the 56th Venice Biennial Exhibition and Milan EXPO Arts and Food at La Triennale di Milano. He is the founding director of CRANE, and has developed a number of projects focused on international art, including Pangea II: New Art from Africa and Latin America (Saatchi Gallery, 2015) and 1-54 Art Fair (2013 - 14). He advises private and not-for-profit arts organizations and contributes to publications such as New African, NKA: Journal of Contemporary African Art, Mousse Magazine, and Art Review among others.

Greg de Cuir, Jr is the selector/curator for Alternative Film/Video Belgrade. He has curated moving image programs for Museum of Modern Art Warsaw, ICA London, Los Angeles Filmforum, Spencer Museum of Art in Lawrence, goEast Wiesbaden, L’Alternativa Barcelona, Yugoslav Kinoteka in Belgrade, and other institutions. His writing has been published in Cineaste, Jump Cut, La Furia Umana, Festivalists, Belgrade Literary Journal, and other journals and volumes. He is editor of the journal NECSUS and the book series Eastern European Screen Cultures, both for Amsterdam University Press. De Cuir received his d.phil. from the Faculty of Dramatic Arts at University of Arts Belgrade. He lives and works in Belgrade as an independent curator, writer, and translator.

Melanie Keen has recently been appointed Director of Iniva, following five years as Senior Relationship Manager at Arts Council England. Keen’s career spans two decades in the visual arts as a curator, consultant and an arts funding manager. She was Projects Curator at Iniva until 2003. Before joining Iniva in 1997, she co-edited and compiled the publication Recordings: A Select Bibliography of Contemporary African, Afro-Caribbean and Asian British Art. Her independent curatorial projects focused on collaborative practices and process-based approaches to making work. Other projects include the production of a national education resource which explores the history and legacies of the transatlantic slave trade for the National Maritime Museum, London; Necessary Journeys, an Arts Council England initiative in collaboration with BFI Black World; and an international symposium in collaboration with Tate Modern.