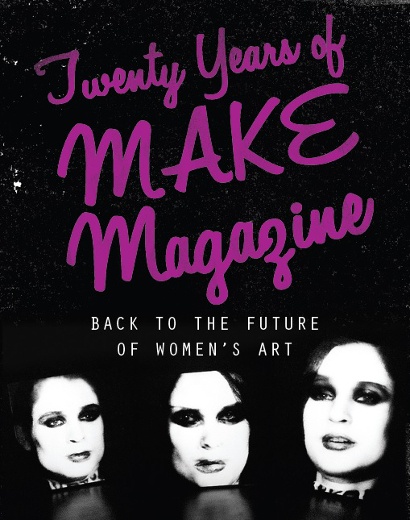 Stories That Matter: Feminist Methodologies in the Archive

This event marks the publication of the anthology Twenty Years of MAKE Magazine: Back to the Future of Women's Art edited by Maria Walsh and Mo Throp (I.B. Tauris: 2015), which is launched at the end of the day.

Leading practitioners of feminist historiography from both art history, Prof. Griselda Pollock, and the social sciences, Prof. Clare Hemmings and Prof. Maria Tamboukou, will present how their particular feminist methodologies have made a difference to their mutually respective sites of 'archival' encounter. The event also includes a presentation by Walsh and Throp on their research and is chaired by Dr. Catherine Grant, whose work on queer re-enactment addresses the retelling of the past for future generations.

Professor Griselda Pollock is Director of AHRC Centre CATH, Leeds University, since 2001. Her research engages in feminist, social, queer and postcolonial interventions in the histories of art, trauma and cultural memory, representation of and after the Holocaust, 19th-c. to contemporary visual arts and film, critical studies in contemporary art and curation, and issues of Violence and Non-Violence in art and culture. Relevant recent publications include After-Affects / After-Images: Trauma and Aesthetic Transformation in the Virtual Feminist Museum. Manchester: Manchester University Press, (2013) and Encounters in the Virtual Feminist Museum: Time Space and the Archive. Routledge, (2007).

Clare Hemmings is Professor of Feminist Theory at LSE's Gender Institute where she has been since 1999. Her main research contributions are in the field of transnational gender and sexuality studies. Relevant publications include Why Stories Matter: The Political Grammar of Feminist Theory (Duke, 2011), 2014 Special Issue: ‘Revolutions’ for Feminist Review, and she has just completed her new book on the significance of Emma Goldman for contemporary feminist and queer theories.

Maria Tamboukou is Professor of Feminist Studies and co-director of the Centre for Narrative Research at UEL. She is also co-editor of the international journal Gender and Education. Her research develops in the areas of critical feminisms, auto/biographical narratives and studies in neo-materialism. Relevant publications include Sewing, Fighting and Writing: Radical Practices in Work, Politics and Culture, London: Rowman & Littlefield (2015); Feeling Narrative in the Archive: the question of serendipity, Qualitative Research (2015);  and the co-authored volume The Archive Project: Archival Research in the Social Sciences. Farnham: Ashgate (in press).

Dr. Maria Walsh is Senior Lecturer in Fine Art Theory at Chelsea College of Arts. She is also a writer, and author of Art and Psychoanalysis (I.B. Tauris, 2013), as well as many articles on artists' moving image. She is currently guest editor of Feminisms, the forthcoming issue of MIRAJ (Moving Image and Art Review Journal).

Dr. Mo Throp is Associate Researcher at Chelsea College of Arts. She is also an artist and writer. She was Chair of the Trustee Board of the Women’s Art Slide Library from 1994-1997.

The symposium explores whether feminist methodologies make a difference to the kinds of stories that can be told using archives in the expanded sense: actual archives, virtual archives and/or other concrete sites of encounter which generate historiographical work.

In this work, a tension has often existed between the desire to establish feminist epistemologies and at the same time to attend to feminist ontologies - in other words between knowledge and experience. This is nowhere more so than in the archive which has traditionally been considered as a repository of the past that affords a ‘true’ construction of it. However, this traditional idea has also been the basis from which women have been occluded from history. Added to this, it also maintains the subjectivity of the researcher/historiographer as neutral, thereby hiding the ideological assumptions that underlie this kind of work.

In this symposium, we follow feminist interrogation of these assumptions by adopting Donna Haraway’s methodological approach to research as ‘situated knowledge’. Essential to the convening of this symposium has been Pollock’s concept of the virtual feminist museum as a ‘becoming futurity’, Hemmings’ emphasis on citational practices and textual affect, Tamboukou’s concept of archival research as intra-actions between phenomena. We ask what differences these new affordances allow for accounting for the past or reactivating its memory in the present? How do feminist pasts engage future readers?

An unlikely feminist, Guy Debord, in his infamous Society of the Spectacle posits the question: what would a living archive be as opposed to the archive as the custodian of the dead time of history which merely administers it rather than makes it available for use? Do feminist methodologies in the archive (as museum, publication, or documented record) provide methods for resisting the administration of history? How might we ‘break open’ the archive to listen to and disseminate its contradictory voices so that they may resonate with the present thereby making it available for use for contemporary generations of feminists, men and women?

The symposium is funded by The CCW Graduate School Staff Fund and coincides with the CHELSEA space exhibition CAN DO: Photographs and other material from the Women's Art Library Magazine Archive.