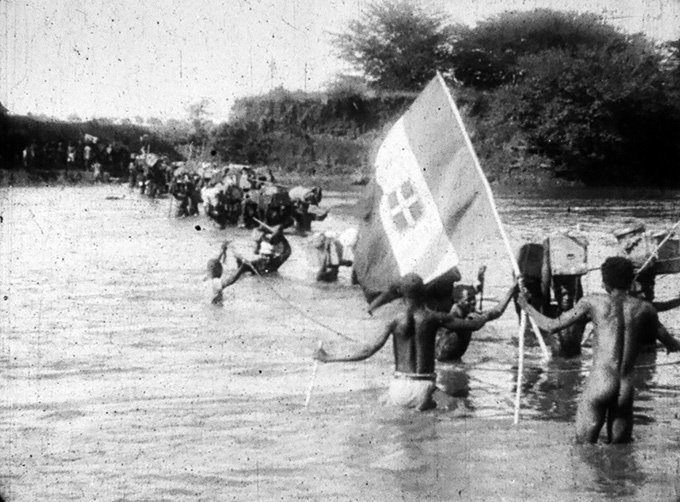 From the Pole to the Equator

This screening will be introduced by award-winning filmmaker and artist Ben Rivers.

A terrifying indictment of the human as predator.
- Ben Rivers

This rarely screened 16mm experimental film is drawn from the 1910 archives of Luca Comerio, a pioneering Italian documentary filmmaker who photographed ‘exotic’ peoples from the North Pole to the Equator. Yervant Gianikian and Angela Ricci Lucchi rephotographed and hand-tinted Comerio’s spectacular footage of early Arctic whalers, Cossack-like soldiers riding on horseback, missionary schools, hunting and warfare in Africa, British India at teatime and Italian Alpine troops in World War I. They refashioned Comerio’s work in order to tease out the ideology written upon—and between—every image: in Gianikian’s words, “the violence of colonialism as it plays itself out in different situations and spheres.”

“To watch From the Pole to the Equator is to feel that one has seen a ghost – many ghosts, human and animal from places all over the globe.” - Janet Maslin, The New York Times

“Fragmentary, dreamlike, these remnants of an imperialist cinema which strove to shrink the world into a strip of continuous images for eternal possession have the ghostly quality of a collective memory” – Kay Armatage, Toronto International Film Festival

Courtesy of The Circulating Film & Video Library, The Museum of Modern Art, NY.

This screening follows the Wild Minds Symposium in partnership with Kingston University.