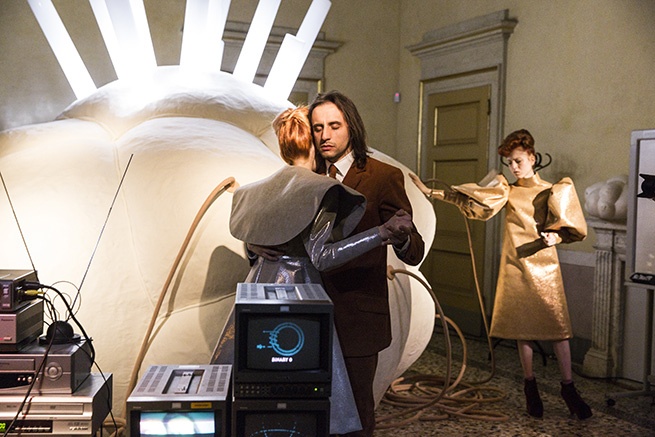 Moment Memory Monument (2017) is Georgina Starr’s most recent work. It is a large-scale sculptural performance installation where visitors are chosen by 'The Sun' and 'The Moon' and offered a chance to return to a lost memory. This lecture is a guide to the voice of the central time machine known as 'The Sphere’ – while the audience is able to experience the mystery of the temporal shift.  Beginning with Starr’s history of encounters with ‘The Voices’, heard and experienced in many forms and from an early age, this lecture attempts to map out the journey revealed by the strange companionship of these fragile and elusive others.

Georgina Starr is a British artist working with video, sound and performance. Her works are known for their complex and fragile emotional narratives, in which she explores female identity, history and fiction to create multi-layered theatrical events and installations. Starr often appears in the artwork, either as a performer or narrator. The inherently speculative truth of memory and biography are endlessly transformed and explored through her work—“Everything happens as if it were experienced twice, as though recorded, listened again and rewritten, once for herself and then again for the stranger inside her.”

Georgina Starr has exhibited widely over the last 25 years in galleries and museums both in the UK and internationally, from the Museum of Contemporary Art Sydney and Tate Britain to Kunsthalle Zurich in Switzerland and the Museum of Modern Art in New York. A major survey of her work, Hello. Come here. I want you., opens at Frac Franche-Comté in May 2017 and runs until September.