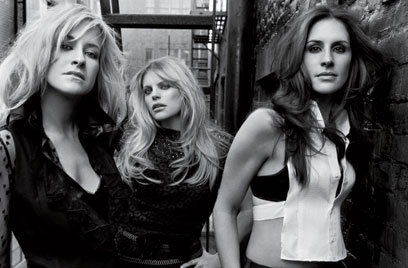 Shut Up and Sing: Dixie Chicks

Excellent documentary from two times Oscar-winner Barbara Kopple and co-director Cecelia Peck, Shut Up and Sing follows country and western group the Dixie Chicks in the wake of singer Natalie Maines' anti-Bush statement at the end of a 2003 concert:

"Just so you know, we're ashamed the president of the United States is from Texas" Natalie Maines.

Shut Up and Sing travels with the Dixie Chicks, from the peak of their popularity as the national-anthem-singing darlings of country music and top-selling female recording artists of all time, through the now infamous anti-Bush comment made by the group's lead singer Natalie Maines. The film follows the lives and careers of the Dixie Chicks over a period of three years during which they were under political attack and received death threats, while continuing to live their lives, have children, and of course make music. The film ultimately presents who the Dixie Chicks are as women, public figures, and musicians.

Featured in the London Film Festival, the film has received vast support from the press, awarded Best Documentary by the Boston Society of Film Critics Awards. Kopple herself is the only female documentary filmmaker to win two academy awards for Harlan Country U.S.A (1976) and American Dream (1991).

"Life in Bush America gets a blunt, honest telling in this documentary that makes you want to stand up and cheer" Rolling Stone