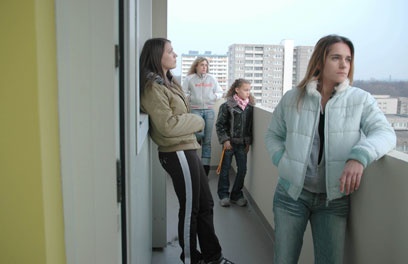 In a dull, West German suburb a rebellious girl gang roams. It's a grey day for Yvonne and her glowering companions.

Set around a bleak housing estate in the doldrums between Christmas and New Year, Yvonne is trying to 'celebrate' her last day before prison with booze, firecrackers and generally threatening behavior. Yvonne is the eldest and most aggressive of the gang, which also includes beautiful Russian emigre Katharina (Irina Potapenko), whose choice of friends shames her immigrant family; surly, blank-faced Jenny (Desiree Jaeger); and tag-along Mandy (Aminda Schichterich), already drinking and smoking though she can't be older than 10.

Katharina, having resettled from Russia to Germany is ridiculed for her trainspotter boyfriend and vilified for her origins. There are hints of her trying to break free from Yvonne and the gang, but she lacks motivation and direction. Racial tensions and gang clashes underpin this film and it's gritty climax will shock.

In the opening scene, a young woman gets smacked in the face out of sheer resentment setting up the violent pace of this hard hitting, award winning debut from Birgit Grosskopf, tipped to be one of the hottest young directors of the German 'new wave'.

As ten year old Kylie struggles to come to terms with her grief, she discovers that imagination can be more powerful than reality.