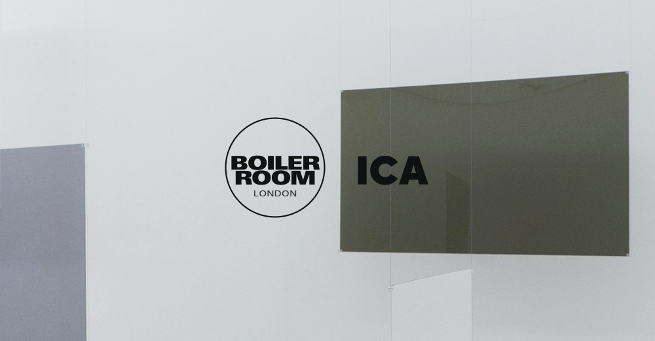 Boiler Room and Logan Sama with the ICA Present

The ICA is pleased to present a year-long series of live events with Boiler Room and Logan Sama. The events will present the most thrilling music from right across the UK grime scene at the ICA.

Tickets are available to ICA Members only through our competition prize draw in advance of each event. If you’re not a member already, you can still join from as little as £10 for your chance to win, plus you can enjoy a whole host of membership benefits. Please see the event pages for details of the Members' competition and how to enter.

You can watch all the events live online via the Boiler Room stream, and follow the conversation on social media via the hashtag #ICAxBR.

Grime is doing fine. It's not having a resurgence nor a revival, it's not been saved or regenerated, it's not in need of a “neo” or “future” version – because it never went away, and it never lost its energy.

Yes, the spotlight might have moved away from it due to the rise of dubstep, or because some of its brighter talents have been seduced into the pop world. A shift from pirate radio to the internet might have affected its visibility too – but as a scene it has not just stayed alive, but steadily evolved and grown. Its older generation increasingly have international careers, able to rock clubs and festivals worldwide, while younger fans still swap rhymes and beats just as they ever did.

The one thing it's been lacking though is a true live showcase. The increasing acceptance of grime into the wider club world means that crews might get booked to do a set at a more diverse club night, and more purist raves like Butterz and Wiley's occasional Eskimo Dances give fans a chance to see several sets like these through a night – but there's nothing that quite replicates grime's natural habitat: the youth club sessions where young MCs could get 16 bars of glory before passing the mic to the next in the jostling queue, where they honed their acts and lines in an environment a thousand times more demanding than any webcam session.

That's why Logan Sama and Boiler Room have joined forces to create a new kind of grime session. Symbolically returning to the ICA Bar, the home of the Dirty Canvas sessions that first brought grime out of London's estates and into its heart, these events will be strictly for the hardcore. As well as being a showcase for talent old and new from around the country, it's a place for true fans and dedicated DJs and MCs to congregate and discuss and argue about the scene they love, to rate performances and records and to bring the vitality of the scene off the messageboards and video comments and into a single room.

Each session will see a set by established or currently hot names with a special twist – perhaps a team-up between MCs who are rarely seen on-stage together, a revival session featuring unjustly forgotten names from the past, or a big name introducing their newest protegé. This headline set will be broadcast and archived on the Boiler Room's channels, but before that, there'll be DJ sets, special presentations and open mic sessions that allow youngsters and up-and-comers to hone their skills in front of a passionate audience. That way, not only will Logan, Boiler Room and the ICA be showcasing where grime is right now, but also providing a vital platform to ensure the headliners of tomorrow can hone their skills in front of exacting audience. - Joe Muggs

About Boiler Room
Ever since its humble inception c.2010, streaming friends playing records in a pigeon-infested backroom via a store-bought webcam, Boiler Room has held a reputation as the defining portal for music culture across the past half-decade. Alongside London, Boiler Room has since expanded to host regular broadcasts in Mexico City, Paris, Amsterdam, New York, LA and Berlin as well as much further afield; its remit has also broadened, from invite-only club sessions to neo-classical and jazz performances in concert halls and art spaces.